The Walk to La Bastille

“Everything is good in the neighborhood” – I said in answer to Morgan’s emailed question about the state of the quartier after her, now, two day absence.

I flirted with the idea of saying that it was a sad quartier since she had left – which from my point of view is true  to a painful extent – but I squelched the impulse to say so – and wrote the following sentences.

“I’m going out for a walk in a few minutes – maybe to the Tour and back,”  I said to her – in emailish.  “Yesterday I did something I haven’t done before because I wasn’t sure how to do it and didn’t know if it would even be fun, and therefore worth the trouble, if I figured it out.

I started out at Parc des Buttes Chaumont  - I used one of my now copiously non diminishing  supply of carnets ( you are certainly a walker) - and walked around the Parc, and then exited and walked  down rue Crimée to the Bassin de la Villette at Place de Bitche, and then down it to the end of the Canal Saint-Martin.

That is where I did the different thing.

I kept on going after the Canal had disappeared underground and  I walked to La Bastille.

The underground canal has a park covering it all the way down to La Bastille.

The water re-appears – which I already knew, I go there all the time – as Bassin de l'Arsenal where a lot of boats are moored.

There is a lock between it and the Seine proper.

The cover park has stainless steel mesh covered air holes all along it.

Men were playing bool and others were playing ping pong on tables that are permanently installed.  Just before the Bastille there was an unoccupied market space – all the covered frames were there but no vendors.  The sign said it was going to be some kind of clothing market.  It was huge.

It was a great walk – I came back as, I often do, up Rue Saint Antoine/Rue de Rivoli to Pont Marie and home.

I wish I had known about this walk when you were here.

I wish you had been with me.” 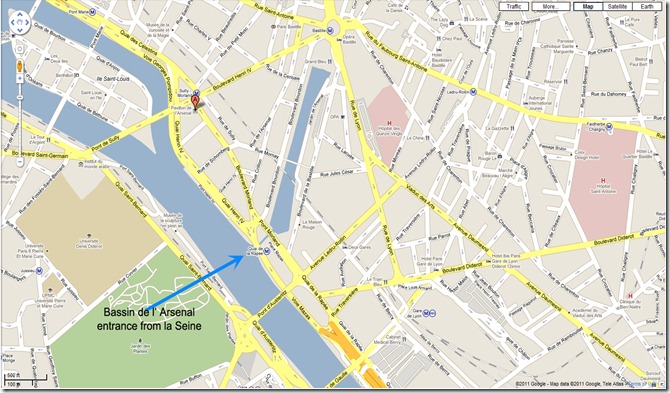