An Eagle is Down

The day after the movie of the eagle that was featured in yesterday’s blog post we were having a late breakfast.  It would have been a late lunch for many, given the time – which was about 1330 – but it was our first meal of the day so it must have been breakfast.

Our doorbell really is a bell.  It’s a lot like the ones employed in the old days by chuck wagon cooks.  It is bell shaped(not too surprising since that is what it is) and it has a ringer mounted up deep in its innards.  It is mounted on the right side of the dual doors that allow entry to the house. That doorbell ring, which consisted of several assertive swings of the ringer with its attached leather thong tether, was followed by a rapid and assertive series of knocks.  This whole deluge of sound was a first for me.  I had never heard the bell before.  I had never thought of it as a doorbell before.  I had thought that it was there to call the hands to dinner.  I have wondered since we got this place what ever became of those hands.

My wife answered the door.

It was a neighbor.

And they both trailed back into the kitchen dining area.

That phone is a very valuable antique.  It is a blue Princess phone from the days when there were still phone cops.  We keep it prominently displayed on the window sill of the window looking out of our kitchen eating area at the next door neighbor’s fence.  The cord is just long enough to reach over to our massive mahogany plank dining table.  That makes it possible to put the phone on the dining table.  With the phone on the dining table one can sit in one of the dining chairs (actually they are part of the outdoor teak table and chair set but the wind precludes sitting out much so that table and those chairs have migrated indoors).  Having that table indoors allows it to be used for piling, sorting and categorizing magazines; and the chairs can be used as dining chairs.  Having those chairs inside and deployable as dining chairs makes it possible to put off the decision of what the correct type of dining chairs might need to be.

And that sort of suspension of decision is always a good thing.

Anyway, all of these things – the chairs, the phone, the piles of magazines – are part of an intricate sort of habitat that we are creating for ourselves here on the island.

There are many parallel other components of that habitat.

To mention one: the phone is seldom if ever put on the dining table with its attendant dining chair (or outdoor chair to be completely accurate) allowing an office like configuration of phone, chair and table.  Instead, the phone is usually used from its accustomed place on the window sill.  That makes it possible, makes it likely, really, that in the course of using the thing it will be pulled off onto the carpet with a slightly muffled ring and crash.

That keeps things like long distance calls short and keeps the phone bill down.

Our neighbor headed for the phone.  I said “good morning”.  He dialed the phone.  My wife said “may I ask what is the emergency?”  Our neighbor said “just listen to what I say to 911and you will discover this.”  I wondered if the guy was an IT Professional.

He told 911 that there was an eagle with a broken wing at an address which he gave them.  He listened to whatever it was that 911 responded with and then said that he needed somebody to come out and get the eagle.  He listened again and then said “great” or something to that effect and hung up. Then he turned to talk to us.  The phone fell to the floor with a muffled ring and crash.  I scooped it up and put it back on the sill.

Valuable antiques such as that Princess phone need that sort of immediate attention.

“Its up there” he said pointing in the direction of our vegetable garden.

We responded with some information about Ollie.  We asked a few questions trying to zoom in on the likelihood of the eagle with the broken wing being Ollie.  We both hoped it was Ollie, because an eagle with a broken wing could perhaps be caught and nursed back to health.  An eagle with two functioning wings was well nigh impossible to catch.  The likelihood of it being Ollie was indeterminate based on what our neighbor was able to tell us about the eagle he had seen and called 911 about.

Our neighbor thanked us for use of the phone and took his leave.

A series of related phone calls, initiated by us, ensued over the next 15 minutes.  The upshot of those conversations was that there was no way in hell that 911 was going to send anyone out to catch an injured eagle.  One of the people we talked to did call some agency who would do that sort of thing but we were totally unclear as to when such a visit might occur.  In the meantime, Ollie, or some other eagle that was on the lawn just above our vegetable garden was at the mercy of the all the caprices the neighborhood could conjure.

One of those caprices could have been another neighbor’s dog.

That dog lives a quarter mile away or so.  The dog takes off frequently from his quarter mile away home and races joyfully, barking gaily down to where our neighbor’s lawn, just above our vegetable garden, is.  I have been there several times in the garden or in our driveway as he has arrived from his slightly distant home.

Invariably the scene is the same.

He takes a look at me.

He starts barking frantically, making half hearted lunges in my direction.

I am in no way threatened by this.

Nor am I in any way endangered.

I am, however, consistently annoyed to the core of my being by this behavior.

To cap it off, the dog’s master stands a quarter mile away shouting for the dog to return.

The dog pays no attention.

My wife and I looked at each other.  “What if that dog gets out?” we could hear each other’s minds and hearts saying.

So she went up as quickly as possible to take up a vigil and hope to fend off any attacks by the quarter mile away canine projectile.  I followed as soon as I could get my camera out.

As I approached, my wife was above the eagle on the edge of our driveway.  She was kneeling in the grass watching.  I stopped substantially below her on the driveway.  I turned on the camera and started taking pictures.

The eagle got nervous.

The eagle raised his wings up and down a couple of times.

The eagle raised his wings one more time and flew off.

So much for the broken wing.

He headed south as he broached the beach.  Just as he had passed south out of sight an immature eagle appeared and followed him south.

I couldn’t tell if the eagle on the lawn above our vegetable garden was Ollie.  I didn’t, and don’t, think that this one looked like the emaciated skeleton I had taken a video of the day before. So is it Ollie getting better from his malady?  Or is it an additional sick eagle?

What do you think? 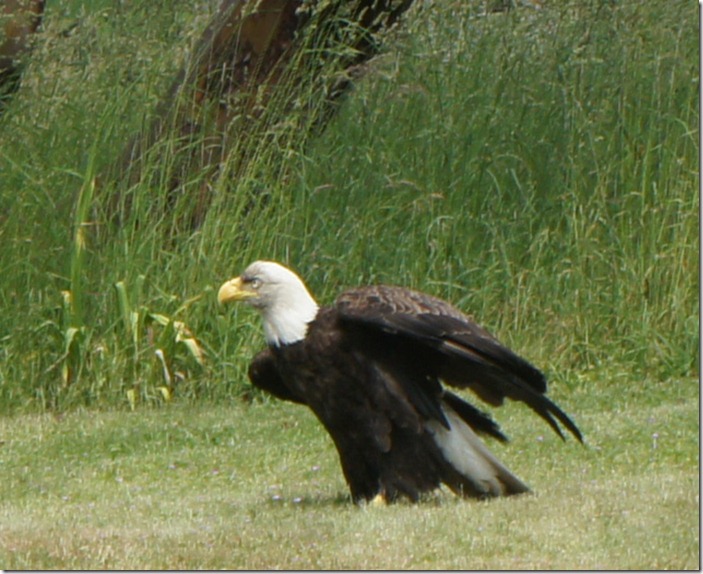