Ollie Update From My Wife

Tuesday AM.  We found the eagle on the beach beyond the trail.  His appearance was very disheartening (see below).   He was lying in the sand, appeared scruffy, moved stiffly, and pooped a few times.  Imagine if you'd slept all night on the beach, and you'll have a pretty fair image of how he looked.  We put out some salmon, but he was not interested.  So as not to further disturb him, we left a short time later.

Tuesday PM.  After the disappointment of the morning, we were relieved to find him sitting on a log looking somewhat better.  We were able to approach quite close and put down over a pound of salmon on a log.  As soon as I withdrew a short distance, he flew to the salmon, inspected it, and began wolfing it down.  Check out this youtube video for an amazing movie about 19 minutes long...the real action begins about 3 minutes in).

In previous emails we discussed his injured RIGHT leg.  After watching him and watching the video, we have concluded it's his LEFT leg that's the problem.  He limps badly when he walks and appears to lack the strength in his left leg to effectively hold fish while shredding with his beak.  Watching him limp is heart-rending, but he's a game fellow.  Although still dirty and dishelved, he seemed more alert and energetic.  After he'd eaten most of the salmon, we withdrew.  We were probably 30' from him, but with the zoom lens we might as well have been on top of him.

Wednesday PM.  He was much farther down the beach, sitting on a log.  We approached to within 20'; he looked a little nervous but didn't fly.  This time we put out turkey breast.  He watched, but didn't come to inspect.  A couple of times he buried his beak in his breast and wing--is this the beginning of preening?  We formed the impression that he was looking and listening to whatever might be in the trees up the hill.  He's still limping badly on the left leg.  A couple of eagles flew overhead screeching.  We thought they might be what he was listening to.  We reclaimed all but two pieces of turkey breast.  Just as we were leaving he took off (flying pretty strongly) and disappeared into the trees.

Thursday PM.  We had to go three hours earlier than normal feeding time.  We found him on the beach just south of the fallen blackened Madrone tree.  He was sitting on driftwood but flew when I approached to put out the food, landing on a branch in a nearby tree .  He was still favoring his left foot and trailed it when he flew.  Unfortunately our timing has not been good enough to catch him flying.  We put down three large salmon filets, which he seemed to see from his perch in the tree.  Uncharacteristically, he turned his back to us and refused to come down to eat.  After a short time we left while he was still in the tree. 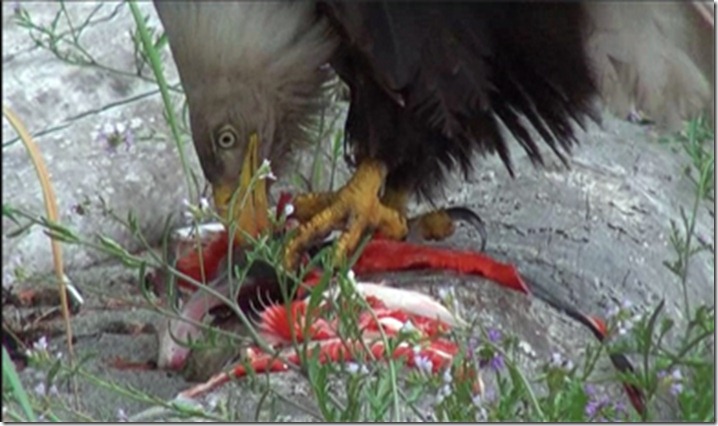 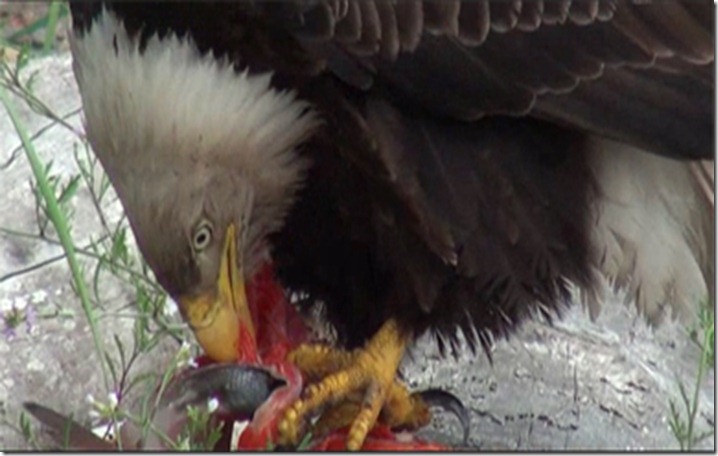 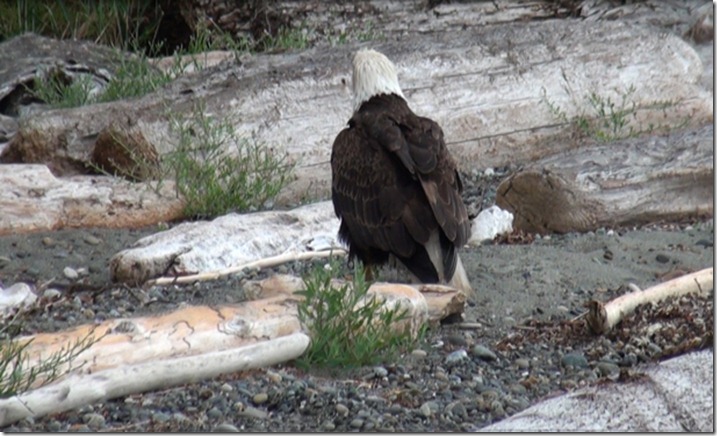