Time Travel of a Different Sort

When I was about thirteen my parents let me buy a Daisy Red Ryder BB gun. It had a plastic stock and fore piece. I made it a new stock and fore piece. It looked really nice. I still have the BB gun. I keep it in the cabinet with my real guns. Unlike my other guns the BB gun doesn’t work. I wore it out. The spring mechanism that drove the pellets just finally gave up decades ago. But I have kept the corpse of that precious little gun. I had hoped to buy a replacement mechanism to fix it, but such a thing was not available.

The activity that caused the spring mechanism to finally wear out was massive. Daisy didn’t build a weak little product, I just used it to its death. An in the process I became a deadly shot.

My wife and daughter are in London baby sitting one of my daughter’s friend’s cats. I am baby sitting our last remaining cat, Bert the 19 or so year old Maine Coon that wandered into our yard in 1998. He likes it on Lopez so we are on Lopez.

Here is an email I sent my wife a couple of hours ago.

I just opened/found my presents.

I had hopefully wished that Midnight in Paris would be there.

But there were two packages.

I guess I had my mind set to seeing Midnight being there when I had opened the first package.

I was almost outside of myself, on the sidelines watching, as a startled yelp of delight came out of me when I saw Groundhog Day. Oddly I was listening – as I am now – to The Tobolowski Files.

I was really pleased that Midnight was in the next.

Then I opened the envelope on the tree.

When I opened the Mysti side of the closet and saw the Red Ryder I experienced a feeling that – even if I had been aware that such feelings were still in me I would have not been able to describe – was an overwhelming surprise.

I was twelve years old again. 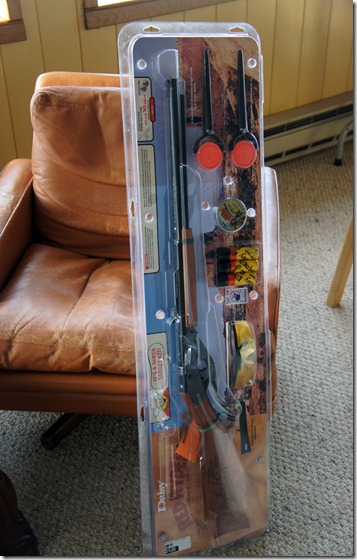 Posted by Noel McKeehan at 4:51 PM