I have gone back to Parc Montsouris several times since I first saw the parrots and posted the item about them.

Parc Montsouris has always – since I first discovered it in 2010 – been a special place for me.  It is the stimulus for and the location of the most magical parts of The Story of Adrianna.

But it is special even if it hadn't manifested some sort of supernatural influence upon me.  I guess it has become my favorite green place in Paris – even more favorite (my lexicon allows degrees of favoriteness) than le Jardin du Luxembourg.  But then that is easy to say because the walk that I take to get to Montsouris involves a walk through or circumnavigation of – depending upon the amount of time I have allocated – le Jardin.  The subsequent – to le Jardin – walk through le Jardin des Grandes Explorateurs as I wend my way toward l’Observatoire de Paris and on to Avenue René Coty and the gate to the Parc is not a bad little bonus either.

Anyway I have been to Parc Montsouris several times since the initial 19 December encounter with the parrots, including twice in the last three days.

And each time I have seen the Parrots.

And each time I have gotten better pictures.

I have learned a lot from taking their picture how to control the light on my camera to get the best possible color.  The light setting I would use for any of most of my pictures yields images of small dark lumps that could be parrots or could be birds, or could be squirrels, or could be some form of cancerous growth growing on a tree branch.

Proper light and maximum zoom yield pictures that due, to the 24 mpx density of my camera, can be cropped using Photoshop to produce some pretty good pictures.  That is what produced the ones in my previous post.

But distance is still the enemy.  And these birds like to sit way up in some pretty tall trees.

I had decided to walk around the lake and maybe go up the mountain to the trees where the birds had been on my other expeditions – or, maybe not.  It was a grey day and getting dark and those are really adverse conditions for trying to get any decent pictures of birds sitting high in trees.

I had just started down the path that skirts the lake on the side that abuts the mountain.  I watched a few of the coot or coot-like birds that are such clownish presences on the lake and its immediate shoreline. I looked for the black swans but they were somewhere else.  I was standing there doing these things and was about to move on when I heard over my head – very close – a shriek.  It was the unmistakable shriek of a parrot.

I couldn’t believe it.

As I got in front of and under this small tree there were ten parrots.

And they weren’t paying any attention to me.

And they were unbelievably close.  200mm might even be overkill.

They were happily and with great abandon ripping to shreds the cranberry sized green berries that grew on the tree.

My fleeting observation about 200 mm overkill turned out to be correct.

When I went through the inventory of the day’s shots I was hard pressed to find one where I had not cut off the birds’ long tails.

But there were some.

Here is one of them: 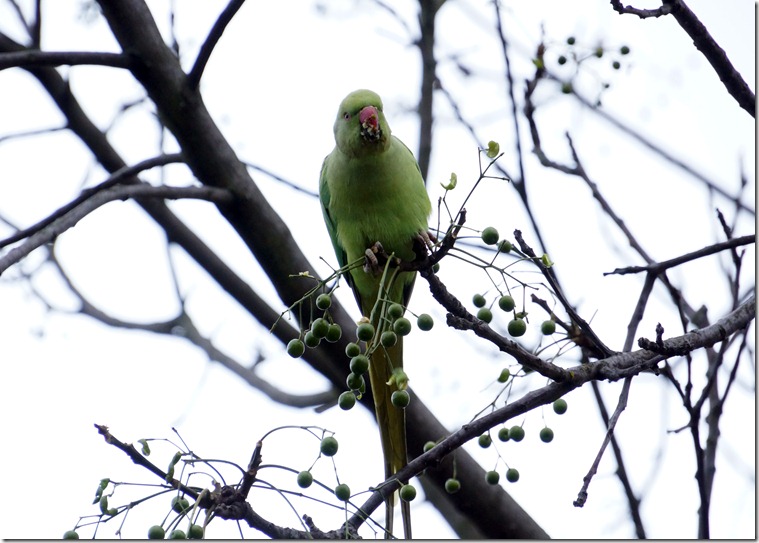 Yesterday I didn’t get out of the apartment until 1420.

I decided that I had enough daylight left on a dark, grey, foggy, drizzly day to go to Montsouris and then walk to Port d’Orleans Metro station and go back to stop St-Sulpice and have a late lunch – I hadn’t eaten yet – at Café du Metro.

I thought in passing about the parrots but thought that they had probably eaten all the berries and moved on.

As it turned out I was wrong. 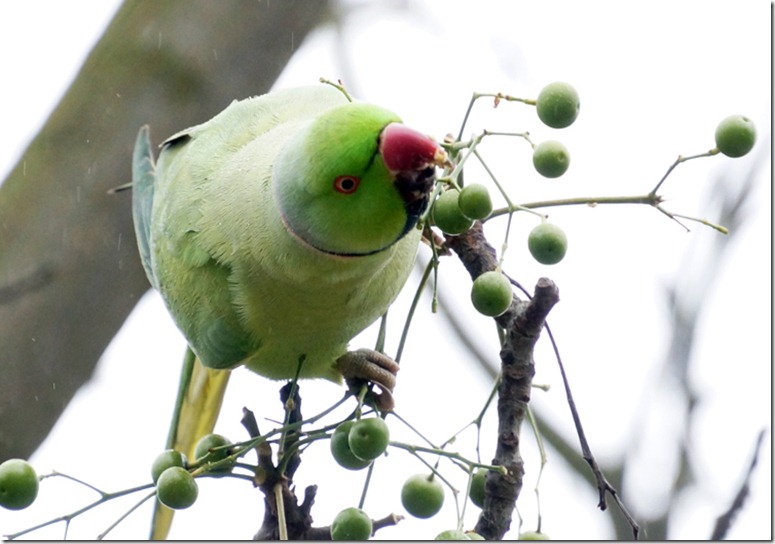 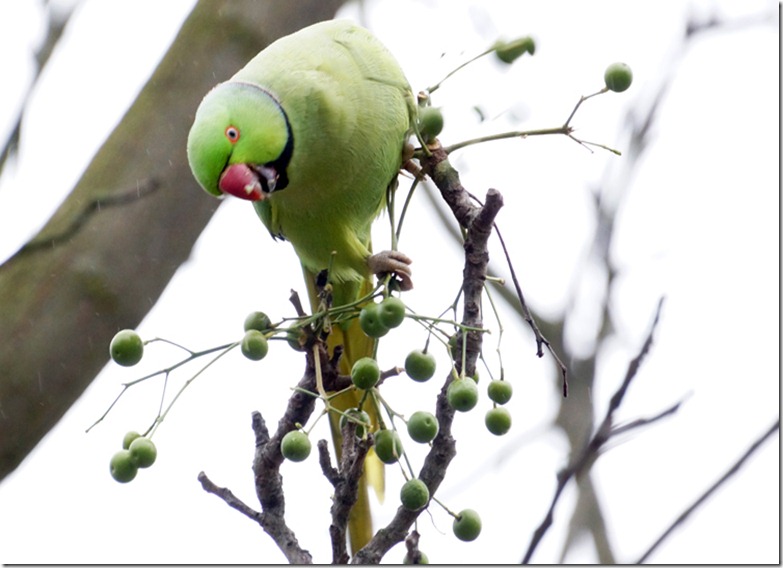