Today I took quite a long walk.  It had started out to be just – I had hoped – a long walk.  I was going to make a trip to Pont d’Alma and back.  That is usually about a two hour circuit, allowing some time for taking pictures of the inevitably interesting things that always appear.

Some days that route is a pretty good source of Pigeon Drop contacts.  Today that didn’t matter.   I have decided to quit trying to catch them in pictures.

Today either there wasn’t as much interesting going on as there usually is, or the spirit of image harvesting had taken a day off and wasn’t there to move me in any significant manner to taking pictures.

I was all the way to Pont d’Alma before I took a couple of pictures of the American Cathedral (it’s either that or the American church, can never remember which is which).  They turned out pretty much as I had planned them to turn out and that felt good. To the left of the cathedral there is a view of the tower of a really ugly old church that I always enjoy taking pictures of.  I can never remember its name. 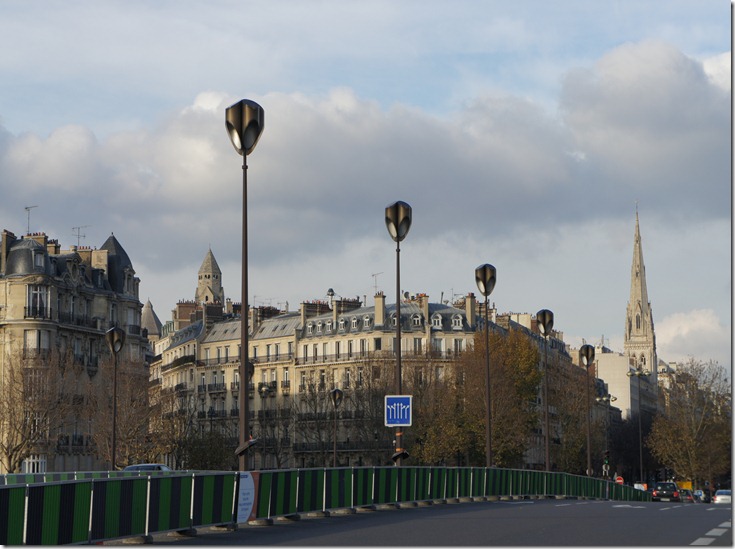 I was contemplating taking some pictures of the Eiffel Tower which was looming at my back while I was taking the pictures of the American Whatever-It-Is, but I just have been feeling Eiffled out on this trip.

Nonetheless, I am probably going to back-fill the looming chasm created by this lack of taking pictures of La Tour Eiffel by making some nighttime expeditions over to the Tour. There is a great North African restaurant that I discovered in ‘08 that is quite close to Champs de Mars.  Those two factors – the lit up Tour Eifel and the food at a North African restaurant – should make a perfect tour guide package.  So I guess I am going to take that tour sometime soon.

I have decided that the nighttime Tower is going to be the acid test to which I am going to subject the Sony computer.

So I was just standing there, not taking pictures and looking stupid, when it occurred to me that I always stop and turn around at Pont d’Alma.  There is no reason for that.  It is just something that I always do.  Since today, as I stood there about to turn around and go back once again, I had a lot of daylight left, I decided to change that for-no-reason much-revered protocol.

When I got to the Tower itself I honored this whole act of throwing the hum drum to the wind by taking pictures of the Tower. 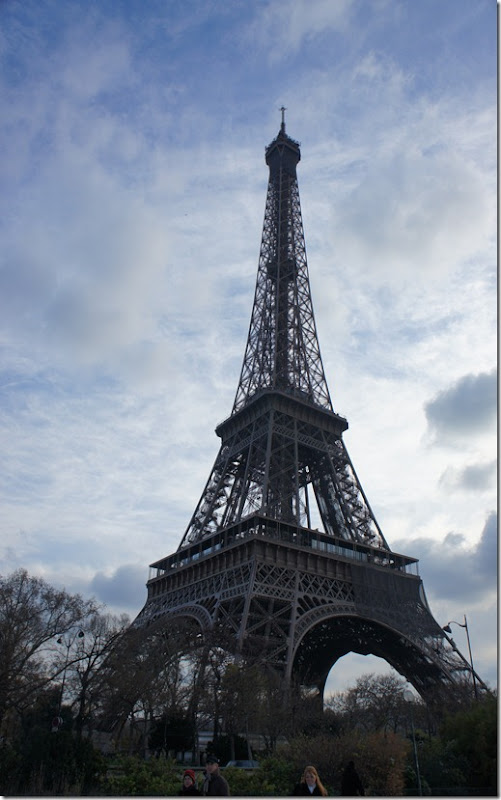 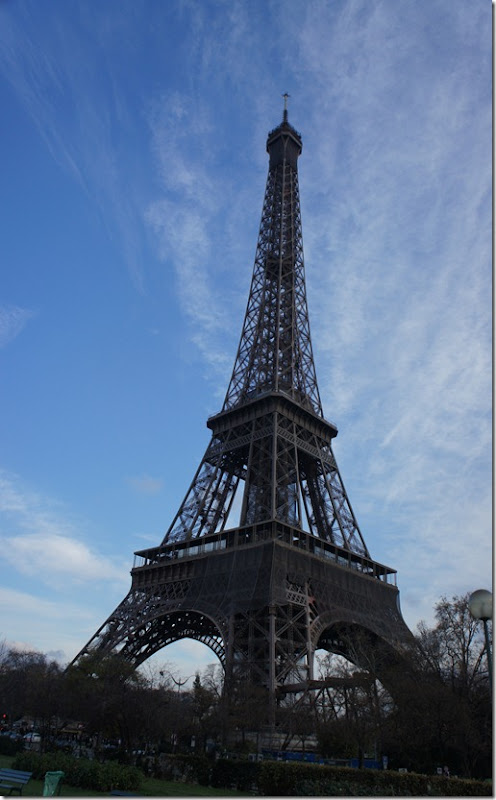 The young woman and associates that I inadvertently caught in the first one – she and they will be gone with the Photoshop if I ever use this picture again, was one of a matched set.  That matched set asked me to, and I complied, take a picture of them.  In fact I took two.

As I got down to Pont de Bir-Hakeim - it was on the lower deck of that bridge that the opening scene of Last Tango in Paris was shot - I noticed that it was getting darker and getting colder.

Today was the first time this trip that I have abandoned my cotton tee shirt with cotton sweater inner wear for my Smartwool jersey and 80 pound wool St James sweater.  Overnight winter arrived with a significant drop in temperature and some snow.  I even bought a pair of gloves when I went to the market this morning.

I let the lengthening shadows and the chilling of the air decide me to not pursue the bridge circuit any farther, but to strike back toward home.  Given the distance that I was away from le 6iem arrondissement, that decision really wasn’t a cop out.  I had a substantial walk yet to complete.  It would probably, in fact, go beyond my target time of 1600.  A cop out would have been if I had gotten on the Metro there at the bridge and ridden home in comfort and style.

I at least consider it comfort and style.

Deciding to strike for home was all pretty much theory, though.

I had been where I was when I made the decision to abandon the river and strike back for home on a number of occasions, but not for a couple of years.  And a couple of years erases a great deal of specificity from my knowledge of places and things. The bridge is host to a Metro line.  That line runs through town on one of the few elevated above-ground platforms along Boulevard de Grenell.  Boulevard de Grenell is not to be confused with Rue de Grenell, or for that matter, Rue Grenell.  I had once had a vague idea of where on the map Boulevard de Grenell wended its course, and I thought I knew, equally vaguely, that that course ultimately intersected one or more streets that I knew pretty well.

So I set off down Boulevard de Grenell.

Even to my cloudy memory it was obvious at every step that I had been on Boulevard de Grenell more than several times – I have lived in an apartment in an alley off of Avenue Rapp and on Rue de Grenell itself several times, and I knew that I had used the route that I was backtracking, more than once.  I had used it as the outbound leg of very long and interesting walk to Le Bois de Boulogne – but with each intersection that I passed, any familiar, and therefore useful, street continued to elude me.

I have become so crass about walking in Paris that it is only when I am semi-lost – it has been a long time since I have actually been fully lost – that I feel as if I am living up to my personal expectations and making good use of the money I keep spending to come and stay here.

So the fact that I was not finding anything but a feeling of vague familiarity as I walked down Boulevard de Grenell along its elevated Metro line was just a tonic.  I could have looked at my map – I have one that is more scotch tape at the seams than paper it is so old and used, and, therefore, a valued friend – but I was totally disinterested in using my old friend to bail me out yet one more time. I was sure that I was right about Boulevard de Grenell intersecting one or more streets with which I had an intimate relationship, and that would, once broached, get me back to more familiar ground.

It was probably due to the fact that, in spite of my deeply held conviction that I knew more or less where I was, and that where I was was more or less on a trajectory to home, and that all that I needed was a familiar street name to appear so that I could complete my walk with precision, the gathering gloom with its attendant increase of chill was beginning to test that conviction.

That was probably the reason that I jumped at the chance to turn off on the first street that was even vaguely familiar.  Its familiarity, I should mention, was enhanced by the fact that the street appeared at a small Place with which I am quite familiar, having taken multiple pictures over multiple visits of the sculpture of a lion that is the Place’s main feature.

The street was Avenue Lowendal.  It just sounded – familiar.

As soon as I had started down it the reason was obvious.  Staring down at me from not very far away was the dome of the basilica that contains Napoleon’s tomb.  I had walked briefly on Avenue Lowendal only a few days before, when I had circumnavigated Invalides. 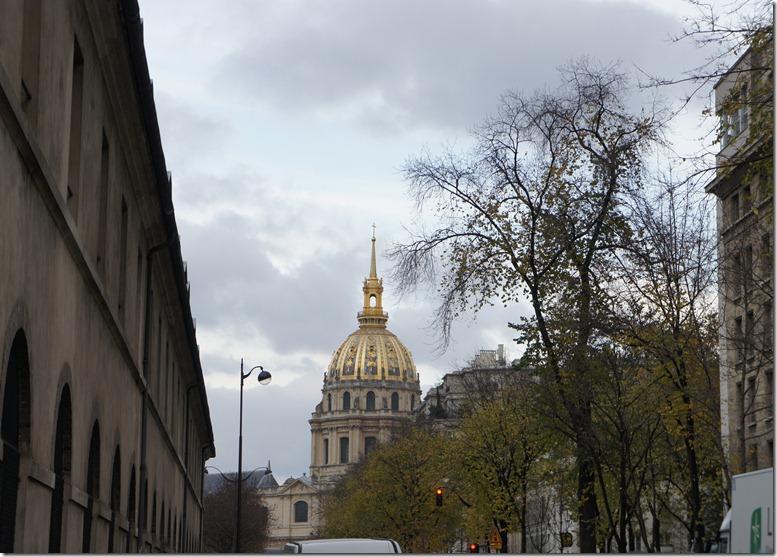