Today I went to Neuilly sur Seine. It is on the Paris Side of the Seine just across from La Défense. Part of it is on a little island. I made a photo tour of that little island a few years ago. Today I decided would be a good day to do it again. As it turned out I got on the bridge across the Seine on the side opposite from the Neuilly sur Seine part of the island. I went down the steps to the island on which was nice square, but there was a gigantic iron fence denying access to the other side of the island, which is the part I wanted to be on. As I was retracing my steps to go to the other side of the bridge so I could get on the side of the island that I wanted to be on, I saw that just up river from the island that I was trying to get to the Nuilley sur Seine side of, there was another, much smaller island.

I decided to go there instead.

Here are a couple of pictures of that island. 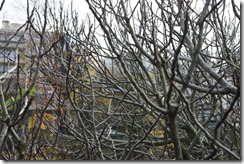 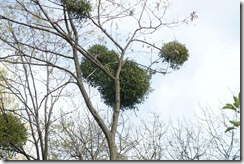 All of that took some time and as I contemplated what to do with the rest of the rapidly waning day I decided to take the Metro back to Pont d’Alma and walk back to the apartment on the left side of the Seine.

Besides this being one of my favorite walks, it is usually alive with pigeon droppers, and I had decided a couple of pigeon drop encounters previous that I want to start collecting their pictures. I am getting so good at recognizing one substantially before he or she goes into his or her shtick, that I felt that I could get a shot of each one of them as they bent down as if picking something up (in the case of the Paris pigeon drop that something being a gold-looking man’s wedding ring).

But today was a lean day. There just weren’t any pigeon droppers. I even crossed Pont de la Concorde over and back to see if I could roust one up. Frequently one will make a hit on that bridge or Pont Royal or Pont du Carousel. Today Pont de la Concorde was a dry hole.

Just across and down a little bit along my main route one guy did make an attempt but it was so clumsy that if I had not been an expert in the game I would not have recognized what had happened. In any event it had happened clumsily, and that clumsiness had taken me off my mark and I hadn’t gotten a picture of it so there was nothing to do but ignore his plaintive cries of “monsieur, monsieur, bon chance, bon chance” and move on down the line.

A little farther on I saw a for sure pigeon drop woman and I made sure the power to the camera was on. But she turned out to be a woman who has tried the game so many times on me – she may even be the original one that Betsy and I encountered - that we now know each other. She said a pleasant “bon jour” and kept on her way.

So it was looking like the days troll was going to prove fruitless.

As I approached the statue of Thomas Jefferson, failure to date notwithstanding, I became alert. I seemed to remember that there often was activity at that point.

Sure enough there was hit in progress. It looked as if the mark had taken the ring and was in the process of putting it in his pocket it and was telling the pigeon dropper to fuck off. I kind of stopped, and even half heartedly pointed my camera in the general direction of the encounter, but I wasn’t fast enough to get the ring, and in any event, it seemed kind of socially unacceptable intruding on someone else’s pigeon drop.

But I did recognize the dropper. He was the big tall brown man that I mentioned in a previous post as the one who had ensnared an English speaking couple, the woman of which was saying to the man “why don’t you just give the ring back to him?”

So what I did do was stop just down from this encounter and stare over the sea wall into the river with my camera at attention as if I were going to take some serious shots. I was hoping that that demeanor would mark me as his next victim, since it looked as if the man of his, by then previous, mark had terminated the transaction.

I was watching out of the corner of my eye, hoping to see the guy come up do the bend down and pick something up act, at which point I was ready to get a shot.

Instead he was suddenly next to me, sort of engulfing me, and showing me the ring in his open paw. Without thinking, I poked the camera almost into his palm and pulled the trigger.

Here it is. I hope to have a lot of the bend and scoops for your edification and entertainment before this trip is over. They are really more fun that just a hand holding a ring.

And there should be hope. I noticed on that recent day that I had my record seven hits, that they seem to come out in droves in rainy weather. 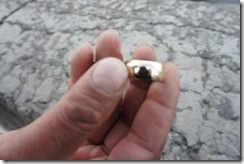 Posted by Noel McKeehan at 9:38 AM