The Parrots of Parc Montsouris

In 2010 when I spent four months in Paris I tried to use all that time to expand my patchy knowledge of the City.

That had been true because, over the years since my first encounter with the place, I had gradually walked more and used the Metro less.

Initially the Metro had been like training wheels on a bicycle.  It got me going.  It gave me myriad places that I would not have found otherwise, and, gradually, let me understand where they all were in relation to everywhere else.

In fact, as I got more and more familiar with the place, I sometimes found myself laughing out loud when I realized that a Metro trip I had just taken had put me somewhere that I really knew how to get to by walking, and that by walking I would have gotten there in half the time.

I decided in October of 2010 when I arrived for the four month sojourn that I would walk everywhere.

That quickly evolved into a desire to walk to ever more new and different places, places that I had not previously seen.

That led to a daily scan of the Plan de Paris for places that I had not been to before.

That led to my first visit to Parc Montsouris.

That visit was in early November.  The way I describe it in A Curious Confluence: The Story of Adrianna is pretty much how it happened in real life – up to the point of my entering La Souris Verte and being transported to another place and time.

But even without the excitement of time travel I had fallen in love with the Parc from the first time I had seen it.

And I have visited it many times since.

The walk from La Seine to Le Parc quickly became one of my favorites.

In 2012 I decided to stress test my love of Paris.

I rented my apartment for five months – 1 September to 31 January.  Five months was a longer time than I had ever spent in Paris.

Of course I resumed my walks.

By 21 November of 2012 I had visited Parc Montsouris a number of times.

The high point of those 2012 visits had probably been a sun drenched day in early October when I took a sandwich poulet, my collapsible plastic travel wine glass, and two 25 cl bottles of Côte de Rhone and sat on a bench by the little tear shaped lake and ate my sandwich while I fended off the swans and ducks that wanted to share.

I told them eating a sandwich poulet would be cannibalism, but they seemed not to care.

So I was surprised when 21 November became a day superseding the total enjoyment I had experienced eating lunch with the ducks.

It was a bitchy cold day such as only Paris can provide.

Things were feeling dark without being dark.

Although things were far from bright: there was a thin and ominous cloud cover filtering an already weak almost-winter sun.

As I crossed Avenue Reille a drastic wind gust seemed to shout “this is winter and you’re going to be cold and miserable”.

But that had always been my state of existence while in Paris, so I just laughed derisively and continued to cross.

Then I heard it.

It was a sound that I knew but found unbelievable in the face of the winter chill.

Where I live in Seattle there is a large enclave of urban forest named after Lincoln’s Secretary of State William Seward.

Seward Park has a resident population of parrots.

A pair once escaped from some nearby household and the escapees have prospered and multiplied.

So I know the call of a parrot.  I hear them all the time in Seward Park.

I looked in the direction from which the sound had come: up high in a very tall copse of trees that skirt the outer edge of the Parc.

I couldn’t see anything.

I decided that I had had a hallucination and passed through the gate and into the Parc.

After paying homage to all my rituals of places to visit in the Parc I was on its backside, across from the University of Paris compound when I heard the sound again.

This time I could actually see them.

And in several other – increasingly later in the winter encounters – I saw them again and, sometimes, managed to get pictures of them.

Here are a few. 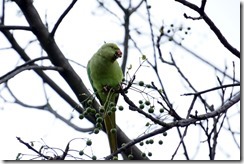 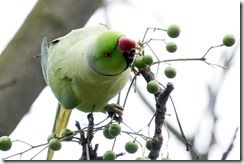 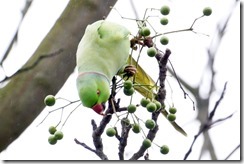 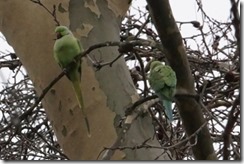 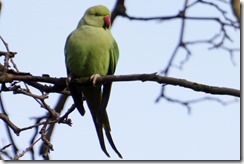 Posted by Noel McKeehan at 8:20 PM