A Sort-Of Poem Just Popped Out of Space and Time

In the early predawn of 31 May I awakened as I often do at that time of day.

I didn’t need to look at the clock.

My near neighbor in the trees just across the Seine had begun to sing his morning song.

Merles Noirs do that.

As I listened to the melody loop and repeat and change and unfold  an almost audible thought crossed my mind.

For some reason I kept thinking that phrase.

After all, pre-dawn 31 May is almost June.  So the phrase was certainly true.  But I couldn’t shake the feeling of deeper meaning.

As has happened on a few other occasions, usually in Paris, the yellow writing pad seemed to be the only way to banish the thought and get back to sleep.

This sort-of poem quickly wrote itself.

I thought I heard someone say.

There, I heard it yet again.

Means it that June is almost here?

Surely it can’t be that simple.

Means it that the end is near?

Surely it can’t be that grim.

If it were the end,

The end of what?

If it were the end

The set of the chestnuts;

The reddening of the berries;

The chirp of the robins;

The chirp of the merles.

There, I heard it. 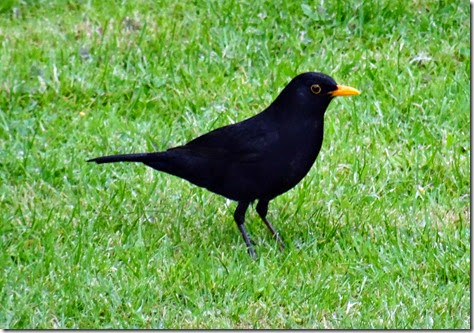 Posted by Noel McKeehan at 1:41 AM