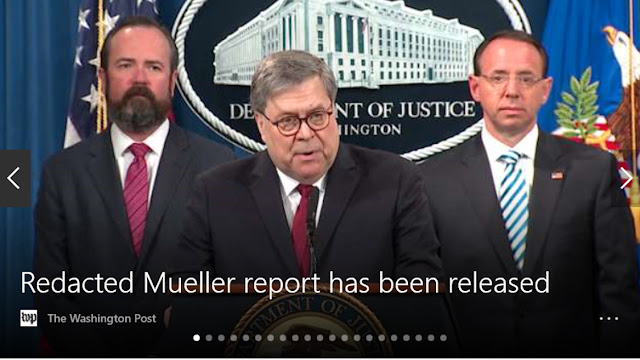 "He was so distraught that he lashed out and stuff which looked like obstruction, but it really wasn't; he was just real fearful about his presidency".

Slime is creeping out of the nation's sewers and covering the land.

Now we get to see how really stupid are the so called American People.

The republicans are already calling on the "socialist" Democrats to stop "throwing tantrums" and "get back to work".

If one pays attention to the Mueller Report, one draws the conclusion that Mr. Mueller has said to Congress, "you guys need to figure this out".

If that is "throwing tantrums" so be it; it certainly is - finally - "getting back to work".

And if decent affordable health care for all and if providing a system in which everyone has a real shot at home, hearth and family (unlike the current serf based system) is socialism, I say bring it on.

It is interesting that the biggest argument in donnie's favor is that when he ordered various people to break the law they just didn't pay any attention.

That is a powerful argument against impeachment?

I guess that I hope that when he orders the military to nuke Iran, the military will invoke the "we're not paying any attention" protocol.

The odd thing about the Mueller Report, now that we can see some of it, is that it's impossible to redact credibly - you know, leave anything un-blacked out - without leaving all the key questions still unanswered.

There is just too much to be credibly redacted.

So all the key questions remain as still unanswered.

It is obvious that Billie Barr, starting with his four page memo, through his assertion that donnie's campaign was spied upon, and finishing with this morning's pre- release "briefing" has been indulging in a calculated and ongoing act of rope-a-dope.

And that has been an act calculated to keep the idiots in the base going down the drumpf  drain.
Posted by Noel McKeehan at 8:38 AM