When I was in the "war effort"  in 1967, I used to like to go into the mostly Vietnamese area of downtown Saigon and take pictures.

The other major sortie to downtown, once a month at payday, was to go somewhere around The Brinks.

There was a French restaurant - The Mayfair - that was so good.

Street food vendors were always prime photographic subjects when I was in the other part of Saigon, mentioned, above.

That  place was where I learned that if you don’t have refrigeration and want to sell chicken meat you keep the chickens alive and break their legs so they can’t run away.

In support of my distaste for Saigon and the war effort I invented and adopted the urban legend that Saigonese ate the feet and threw away the chicken.

In later years I discovered that there was an element of truth to that: they really like the feet.

Anyway, this image got presented recently by Screen Saver (I have digitized my Vietnam
ektachromes). 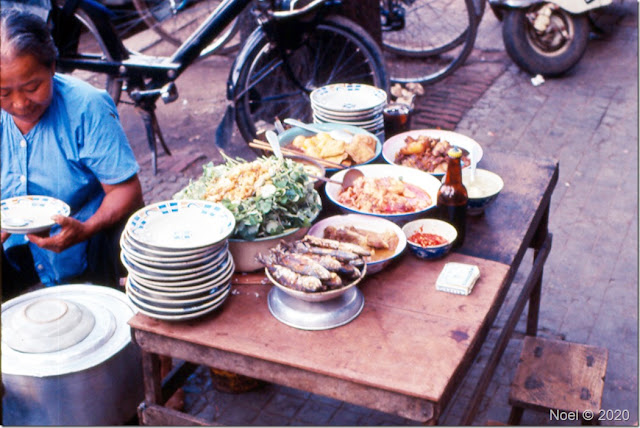 My 2020 reaction has been “those people must have had the immune system of a wart hog”.

I don’t know if wart hogs have robust immune systems, but I like the sound and rhythm of the phrase.

It's a fun little book.

Posted by Noel McKeehan at 9:16 AM