Are republicans ALL Whiners?

Here is a cut and paste from an email I just received from Daily KOS.

"Noel, in the past year, Democrat Jaime Harrison received a tsunami of small donations, totaling a record-breaking $86 million to defeat Lindsey Graham, forcing Graham to appear almost nightly on Fox News to beg the audience for money. He even used the Senate Judiciary Committee pulpit during a hearing on Amy Coney Barrett’s Supreme Court nomination to complain about all the money, issuing a plea for donations to help him because he was delivering the Barrett nomination to the Senate, despite the public outcry. It was not only pathetic, but it might have run afoul of the law, which “prohibits soliciting or receiving campaign contributions on federal property.”

In short, Graham and McConnell underestimated YOU and our collective rage.

In fact, Graham is so upset at the record donations that came into the South Carolina race that he has indicated he wants an investigation after the election. In an interview with The Hill, Graham whined, 'Where’s all this money coming from ActBlue coming from? How easy would it be to just have a bunch of pre-paid credit cards?'"

I ran this Quicken report.

It shows my contributions through ActBlue through September.

Just as everybody says, and the republicans smell a rat due to this, they are all small contributions.

But millions of them add up.

This month I have added a little over $200 to the tally, but it isn't in Quicken yet.

I had to turn the report into an image to get it into this post so it's a little blurry.

Also, the dollars are red and minus signed because this is from a credit card account.

I suggest every one of us who has contributed to our cause this year send Quicken reports of the Act Blue component of those contributions to Dum Dum Graham.

By the way, I contributed to Jamie Harrison on this report and again this month.

I also contributed to Daily KOS through ActBlue this month. 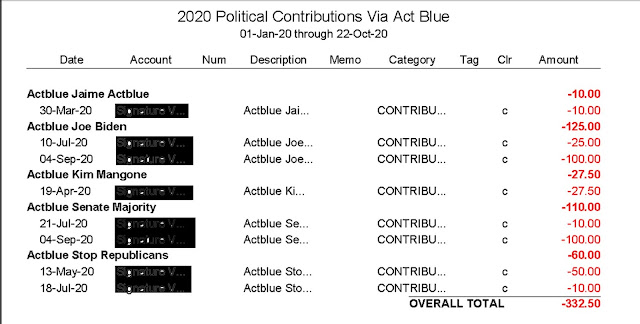 Posted by Noel McKeehan at 2:37 PM