At 17H08 on 8 December from Quai d’Orsay while I lay on a pile of construction material I made a cell phone call to the only person who I know in Paris, my landlord.  I got his voicemail and left him a message.  I had called him because I felt as if someone other than me and the people – none of whom did I know - who were milling around me trying to help me, and who had induced me to lie down on the construction material, ought to know that I had just experienced perhaps the most stupid accident that one could experience and that, contrary to what I looked like I was OK.

Or at least I thought I was OK.

To look at me, which of course – lacking a mirror – I couldn’t do, was to draw a completely different conclusion, I divined from the actions and facial expressions of the people who were trying to help me..

A lot of blood always makes things look worse than they really are.

Or makes them look worse than the bleeder wants them to turn out to be.

The message I left for Thierry was “I need you to know that I have a problem.  I have tripped and fallen on Quais d’Orsay and cut my head.  I’m bleeding like a stuck pig and the people walking with me when it happened have called les Pompiers and the Pompiers are about to put me in an ambulance.”

Once I had left that message I felt kind of stupid.

What was I going to accomplish by – perhaps – ruining Thierry’s Saturday evening?

But it was done.

The only particulars left out by that account are that I had been walking very rapidly for about thirty minutes continually trying to pass a lot of people who had no idea where they were going and who had solved their problem by forming vast clusters of bodies making travers by people who did know where they were going, or thought that they did, down the way, nearly impossible.

I had just gotten to Quai d’Orsay and things had thinned out.

I found myself midst people who did know where they were going and were moving at Paris speed.

I was as close to running as is possible and to still be walking.  Apparently that state, like  running, leaves both feet briefly off the ground with every stride.  In one of those strides my left toe caught on one of the myriad irregularities on the Quai and I went down.  My hands were quick but not quick enough.  They didn’t completely break the fall enough to stop my head – the right front of it– from trying to gouge a trough in the walkway.

The walkway won: there is no trough.

I had been hurrying to take some pictures of la Tour Eiffel after its lights had been turned on.  It was a half hour after sunset and I was about fifteen minutes away from Pont d’Alma from which I was going to take my shots, and that – I was thinking – was going to be the perfect time of day with perfect light conditions.

I was thinking that as I went down.

The Pompiers took really good care of me.  They took preliminary information, asked my how old I was, took my blood pressure every few minutes, told me they were taking me to Hospital Cochin and put on a triage dressing.

The high point of the ambulance ride was one of the medics.

He said “are you sure you’re seventy?  You don’t look seventy.”

I, of course assumed that he wasn’t thinking that I looked eighty.

I am going to try to tell the rest of this story with a text message exchange – which started when I turned my phone back on while waiting for stitches - and an email stack between me and Thierry (with address information deleted and the sequence of the stack put in reverse so that it makes sense).

Typos and mis-spellings are left to stand.

“I doubt if you have ever had a tenant so glad to see his Paris home.

I got a ride with the Pompiers to Cochin, complete with blood pressures, and triage wound dressing. They stayed with me until the hospital staff took me officially into their jurisdiction.

That started with  a preliminary interview and a wound dressing change.  Then I had to wait for awhile and watch some other interesting cases arrive and be processed in.

After awhile they wheeled me into a room to wait for the Doctor.  She showed up and performed a bunch of tests to see if I was alive and likely to stay that way, looked at the wound and put a third – really temporary dressing on it.  She said she wasn’t sure if I needed stitches (sutures) and called in the Chief Physician who said I did need “stitches” (that’s what she said, all the while apologizing for her un-expert English).

Then she put the stitches in.  She said I needed a cat scan because of all the blood that was collecting and because I take a mini aspirin every day.

So I got the cat scan, got the results of the scan – “no problem” – got debriefed by a third doctor and a nice guy in the waiting room called a taxi and stood out with me in the cold until he saw it and ran out in the street to keep it from passing us by.

I hit the pavement about with my head – I was moving fast down Quai D’Orsay and caught the toe of my left foot on a raised piece of sidewalk that I hadn’t seen – at about 1700 and was home at about 2240.  I’d call that a lot to be delivered by a medical system in that amount of time.  I now have experienced first hand what I have known for a long time: France is a country designed for human beings.

I am unsure of the wisdom of including this picture (the glasses are broken) I took of myself just before the stitches, but what the hell?” 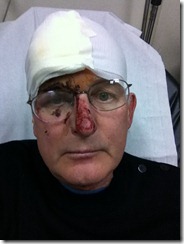 “Noel!!!!
Crazy!!!!!
Bad things happen so quickly and suddenly!!!!!
I am sure you are happy to be safe at home now!
I try to phone many times on your cell phone and at the apartment!
The photo is extremely impressive!
Wow, now, you have experienced also.. the paris hospital!
Your french experience is complete! please avoid the french jail! no no no welcome!
Try to smile anyway!
Noel, I keep in touch if you need anything now!
Sleep well my friend!”

“I have some prescriptions from the hospital.  They are for pain pills – I don’t need these – for bandages and two related or other things that I don’t know what they are and a prescription to remove the stitches in ten days.  To change the bandage every day I need to employ a nurse (or do it myself, but the doctor strongly recommended getting a nurse).  She said I could get referred to a list of nurses at a pharmacy.  I also will need that nurse to take out the stitches.

I am not going to even try to go to the pharmacy today. It’s Sunday and most are closed. nd I just want to stay in and stay quiet. So I am going to stay in read and convalesce.

But I am going to have to go tomorrow.

Could you,please, come by and go with me to a pharmacy and help me get all of this accomplished?

I am doing my best to avoid the jail.”

“Absolutely Great!!! And thank you so much.  So you are not overly shocked when you see me tomorrow here is my picture today.  My friend, the lady in the boulangerie just looked at me and shook her head when I bought my Tradi et croissant this morning.” 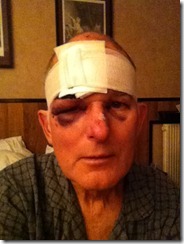