When I had my recent emergency room experience, as I was preparing to leave, I asked where I needed to go to pay.

The docteur told me that they are a public hospital and there was no charge.

It seemed to me that I should pay something for being clumsy and stupid in a foreign country.

But I had also been internally giving accolades to a health system that would let a foreigner chalk up several thousands of dollars of medical expense and not charge him.

The bill shattered that ambivalence.

Having a Paris mailing address may have cache, but it also seems to have disadvantages.

But how could I argue with a few hundred euros for spectacular emergency care?

That was why I was at Parc Montsouris and got this amazing picture of a parrot. 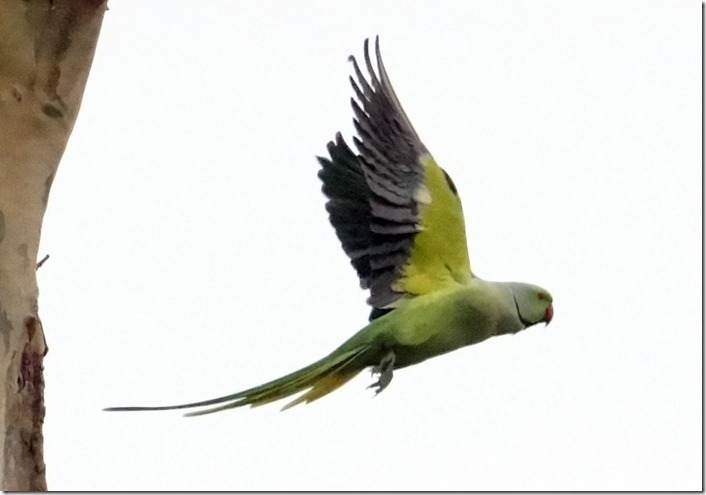 Hôpital Cochin is on the way to Parc Montsouris.

So I decided to spend the afternoon in Parc Montsouris.

When got there – to le hôpital - I went in the accueil entrance and went to the first obvious window and said “I don’t speak French but I want to pay this bill” – in French, of course – and got the usual barrage of French in response.

The woman who issued the barrage obviously didn't like me on sight, but I felt confident that she didn’t like anyone on sight.

The up-shot of the barrage was that I needed to go down the hall that extended at a right angle to that window; the word “telephone” played some part in what she told me that I would be looking for.

I went a-ways and came up to two desks in an alcove on the left side of the hall, one desk of which was occupied.

“Great” I thought; “I must be where that bitch told me to go”.

So I went up and used the same snappy approach that had gotten me all the way into the inner-sanctum to this new factotum of lack of desire to be helpful, but who will go through various motions to preserve her state of being employed.

She assumed a look of extreme boredom and gestured aimlessly in no apparently specific direction.  I made some kind of interrogative reply and she snarled “a gauche”.  I replied “a gauche?”  She said again with emphasis verging on malice “a gauche”.

So I wandered off a gauche for a rapidly becoming interminable time.

I was beginning to question the wisdom of continuing since I was getting pretty deep into non-accounting medical territory - and I have no sense of direction so I could conjure a situation in which I was hopelessly lost in a vast hospital.  Visions of George C, Scott flashed before my eyes when an orderly asked me what I was looking for.

After the same basic exchange I had already had two previous times he said to come with him and he took me back from whence I had come and pointed out a glass enclosed alcove that I had missed.

Part of the reason I had missed it was that it was dark inside.

But once it was pointed out to me I could see a guy sitting in there in the gloom.

So I went up to him and went through my routine – at which I was getting quite facile – and he took my bill and looked at it and then told me that they had had a power outage and he couldn’t process payments.

After the park and the parrot and a nice hour an a half walk I got back to the hospital at 15h35.

That was not 16h00 but I decided to try anyway.

When I got to the window it was still dark inside the enclosure but there were now two people: my friend and a woman.

The woman was a net addition since I had been there at 13h30 or so.

“So I guess two of them are going to decry the lack of electricity” I thought to myself.

I tried to transmit a look of uncertainty - transmitted as if a laser - at the window from several feet away from it; apparently that tactic worked.

The guy gestured for me to come ahead.

After he had gone through the normal rummaging around that precedes making a credit card payment he kept telling me to wait before putting my card in the card reader.

Ultimately his card reader wouldn’t work so he had to pass me over to the woman.

After a similar amount of foreplay and rummaging she – the woman -  told me to put my card in the reader.

After a little waiting, the payment was accepted and I was on my way back to le Jardin de Luxembourg and home.

The thing that I don’t know how to evaluate is that none of the exchanges that I needed to go through to complete this transaction involved English – from me, or from them.

Posted by Noel McKeehan at 1:59 PM