The Beauty Of Our Future

Black people are going to save America.

I heard that frequently in the days before our recent election.

And I was certainly a believer in that premise.

It looked to me as if James Clyburn had already done it by making it possible for Joe Biden to win the nomination.

And Stacy Abrahms just kept doing it - every day - getting people registered to vote in Georgia.

And they were only two members of a huge population of patriots.

So when so many showed up at the polls, bucked the lines, ignored the threats and pushed aside the attempts at repressing their vote Mr. Biden won.

And America might have been saved; time will tell.

But the components of salvation are present.

Among them being our new Vice President.

But she, like everything we are all hoping for, remains to be seen, and heard, and followed.

Of all the the things that have lifted the pall that descended upon the land on the 8th of November in 2016, the people elected in 2020, and the change that they have promised are the most important.

So we shall see.

The cover of the New Yorker, as usual, has summed it all up.

This young woman's eyes are glowing with the hope that she now has for the future.

But, I think, the real message is that she is seeing that future.

And for the first time that future includes her.

In fact that future, really, is her. 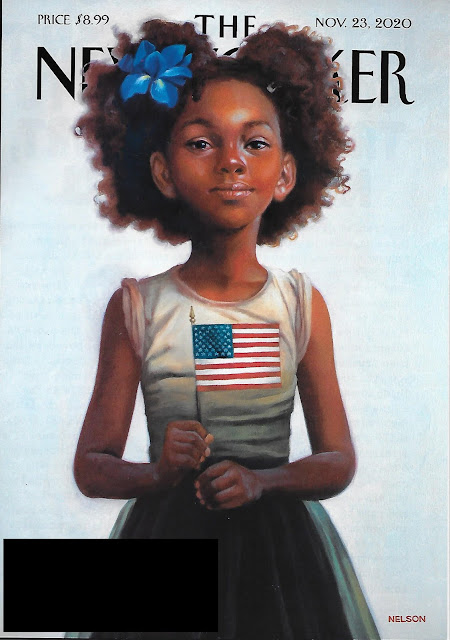 Posted by Noel McKeehan at 1:52 PM