… you would immediately recognize this.

This is from The Mueller Report.

It's in the beginning section about Russian interference in the election.

Fat Billie got his redaction pen out and,

But that's what personal lawyers do; they redact. 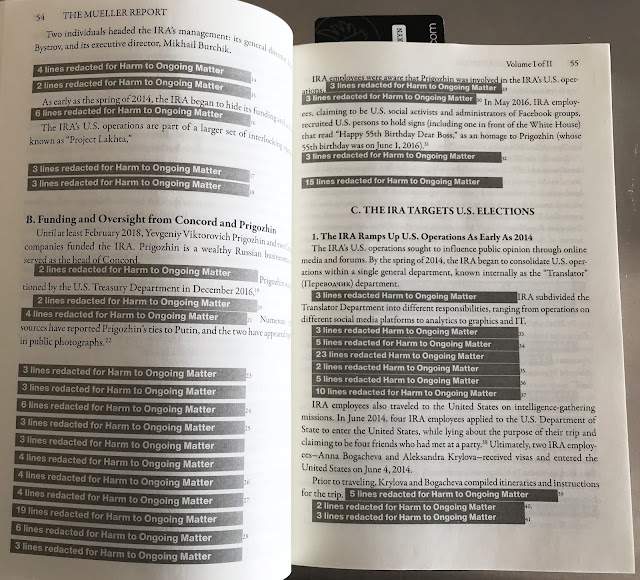 I am several pages beyond this - previously in the report, earlier than this redaction, there are five people who were indicated to be investigated by the Report: Richard Gates, Roger Stone, Michael Cohen - and two others whose names have been redacted, but the redactions made whatever was being said completely incomplete; so I just shrugged and tried to keep reading.

But they do have us ("have being used as in 'having been had'").

We've got the Report; Fat Billie has told us what it says; it's so redacted that we can't argue; and I don't suppose that donnie jr. and jared the slime are the two redacted names in the "to be investigated" segment.

Political theatre is one thing and can be at its best uplifting at it's worst instructive: Brexit;  Napoleon faking wanting to have a three man counsel's office; Hitler telling Chamberlain that the Czechs were the last annexation; Kennedy saying that any attack from anywhere would be deemed to be from the Soviet Union.

On the other hand, political farce is just farce and that is the state into which the oldest and greatest democracy has sunk.

Posted by Noel McKeehan at 7:46 PM