Neil deGrasse Tyson Got Me Thinking

I watch stuff on YouTube so I am constantly algoryihmed.

That is frequently a good thing.

An example of that is the algorithm that served up an hour and forty minute Neil deGrasse Tyson encounter with Robert Krulwich.

It was a sublime experience.

About twenty minutes in Dr. Tyson said something that may be one of not very many things that have changed how I look at things.

Actually it refined deeply how I look at things.

He talked about horizons in the expanding universe, and the importance of vantage point.

I stewed on it overnight - I had seen the video late one evening - and couldn't forget it.

I drew a diagram that I thought represented what he had said.

I watched the video again to see if I had been hallucinating.

Once I found the spot that I thought that I had seen - I HAD seen it - I rolled it back until, to the best of my ability, I thought that I understood it; I was able to ameliorate the inconsistencies and drew a new diagram.

Here it is on yellow lined legal paper. 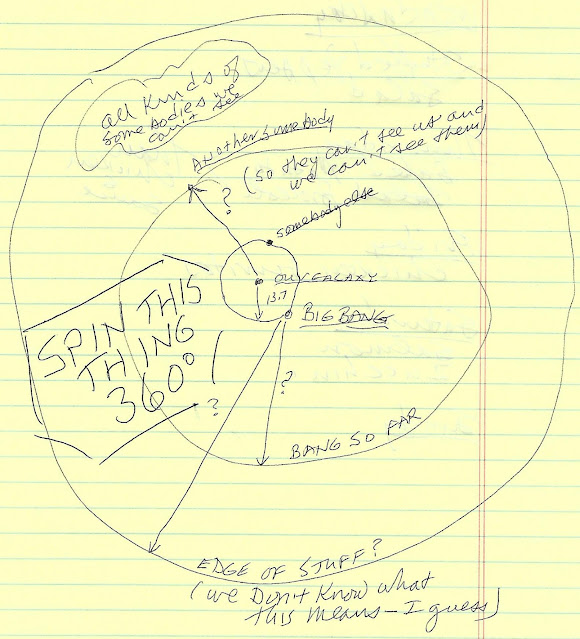 This is what I understood Doctor Tyson said.
The implications, though, boggle the mind: there is an unfathomable amount of matter beyond that which we can see (distance equals speed times time - 176,000 miles a second is rather slow, it turns out).
We can "see" back to the origin which we have somehow set at, to this point of the expansion, 13.7 billion years (that's earth time, so it may mean nothing, but we have to use some unit of measure, I guess).
But the bang is moving out as a sphere so there is some portion of it beyond us.
("Sphere" makes this really interesting, as I hope to show here in a moment.)
Looking back we see things as they were 13.7 billion light years back.
Looking out, I thought I understood that we don't know how many years out we are seeing.
But I guess it may be that we are seeing out 13.7 billion years as we speak, the sphere being in control.
In any event all this is still expanding, and, depending upon where one is in all of that, universes are being born.
And it's three dimensional: it's a sphere.
So solid geometry needs to be employed to have some idea of the number of galaxies there might be out there;
Which isn't everyday tabloid fare.
But maybe, we see them, and they see us, as far as the speed of light will allow, but, since it's all continuing to expand, there is more room out there about which we know nothing and which is waiting for light to get there - at 186,000 miles per second; 13.7 billion light years in any point on the sphere is as far as we can "see".
And what about that quantum quirk?
We have even conducted experiments that document that matter is in more that one place simultaneously.
Merging Tyson's Horizons with Einstein's Quantum gives a hard to comprehend number of  simultaneous instances of  - something.
Posted by Noel McKeehan at 7:35 PM