Tiny Frogs And A Huge Bonfire 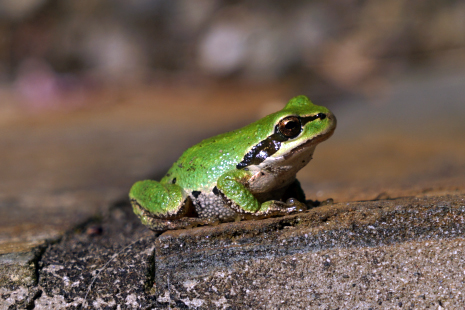 Here is an excerpt from Screen Saver.
As the house on Lake Champetra had begun to take form I frequently went to the site to see how Ken was progressing with the project.  I had been standing on the wall-less first floor – the ceiling of the basement – when the first space shuttle made its successful maiden voyage.  I heard about it as it was occurring on Ken’s portable radio.  On another occasion I had gotten to the building site mid afternoon in an abnormally warm and steamy wet, post downpour, late autumn day.  After checking the progress and talking to Ken about the likelihood of Joe and me being able to move in as planned just before Thanksgiving I had decided to walk down in the woods and look around.  It was late enough in the year that the leaves were all off the trees and the forest floor that afternoon had been covered with the recently dead and more recently dropped and even more recently rain saturated foliage of the black walnuts, the hickories, the red oaks and the white oaks.  I had been savoring the smell and had been feeling the steaminess of everything when I noticed something.  There were what seemed to be thousands, and most certainly must have been at the most conservative estimate, hundreds of frogs.  They were small, almost tiny frogs, perhaps half the size of the Pacific Tree Frogs that I had grown up with.  They were everywhere and they were just sort of “there”; they weren’t really moving but seemed to be sort of looking around as if they were confused or stunned.  My presence didn’t make them jump away or hide; they just looked at me, or at each other, or at the fallen leaves and exuded an air of disorientation, if that sort of air is possible for a small amphibian to exude. They had seemed confused to me.  After some time walking around among them and picking a few up for examination I had gone back to the car and had gone back to Jefferson City.  As I drove back to the apartment on the hill above the Mode O’ Day I mused about how nice it was going to be to have that kind of population of frogs joining me every fall.
I never in the three years that I lived there saw another of that type of tiny frog in the woods.  I looked every fall, but they were never there.
What was there, and had remained there after construction was a huge pile of brush and cedars that had been removed to allow the dynamite people to blast the foundation for my basement out of the limestone. Any of the hardwoods that had been removed had been sold.  After building a house in Atlanta I should have remembered that gambit and should have made the proceeds from that sale be part of the house building deal in my financial favor but I had proved to be untrainable as a timber baron. So Ken had gotten the financial benefit and I had gotten the pile of stuff nobody wanted.  It was piled up on the shoreline.  When Joe and I had moved in just before Thanksgiving it had snowed and the pile had looked like a small mountain down by the lakeshore.  It had remained snow covered for the balance of the winter, and other than being a topographic abnormality it had begun to fade into being an accepted part of the landscape.  But when spring had removed the snow and time and winter cold had reduced it to an ugly pile of dead brown, intensely tangled tree trunks and branches it had become an irritant and an eyesore.  As time had gone on I became more desirous by the day to get rid of it, but I couldn’t figure out how to get rid of it.  Even if somebody had been willing or had been able to get some kind of trash removal vehicle up the goat trail that was passing for my driveway it would have taken several trips to remove the entire pile and the task of untangling it and dragging it up the slope to the driveway would have been monumental; I had visions of needing a second mortgage – and interest rates were at that time fourteen percent – to finance that project.  So the pile had remained and had become uglier and browner.

Occasionally I had thought that I remembered Ken muttering something about burning the pile one of the times that I had tried to engage him in the discussion of removing it as a cleanup component of the construction project.

Time had gone by.  The pile had become even uglier and even browner.  I wanted to get rid of it more with every passing day.  Joe and I talked about the idea of burning the pile. Joe, even when he had been only ten or eleven years old had always had a mechanic’s or engineer’s sense about him; when Mysti and I had bought things requiring assembly we always had Joe put them together and he was always able to do it and do it quickly and correctly, and always with only one try.  So by the time of the great brown pile on the lakeshore I had come to depend heavily upon Joe’s opinion of the practicality of the various physical or mechanical tasks that seemed to always be dogging me. He thought that we could probably burn the pile without setting the house on fire or starting a forest fire; but he did concur that it would be an awfully large fire and one which, once underway, would go until it had run out of pile and before, hopefully it had raised anything surrounding it to kindling temperature.  In spite of the ambivalence of that opinion I had opted to do it.

One cold, recently wet, and not at all windy Saturday in late April we doused the pile with some gasoline from the chainsaw’s fuel can, threw in some matches and stood back in wonder as the thing took off.  We must have experienced a feeling similar to that experienced by the scientists who had watched the first nuclear explosion at Los Alamos.  Once it was under way there was no way to stop it and where it went other than the pile if it went anywhere other than the pile was obviously going to be completely beyond our control.  Those scientists, like Joe and me, had all the theoretic proof they had needed that the bomb wouldn’t start an unstoppable chain reaction, but they weren’t to know for sure until they had set the thing off.  I knew that feeling the day of the great Lake Champetra bonfire.

As it turned out the pile was, for a number of hours a spectacular event on our shoreline but it finally went out having reduced the pile to nothing but a little ash.  Nothing ever grew within several feet of the epicenter of the blaze.

Posted by Noel McKeehan at 2:11 PM