Victoria British Columbia has for years, and forever, dumped its sewage into the Salish Sea.

That has never been very popular with  those of us - mostly Americans - down sea from Victoria; those down-Seaers mostly live in the American San Juans and on the coast of Washington State, including Seattle.

Before recently finally terminating the great turd outflow, Victoria had a public relations campaign that - I am not really sure what its objective was - but its lead-with feature was an icon: Mr. Floatie.

I am not kidding.

Anyway, I think that Victoria has finally decided to spend the money on a sewage treatment plant, or have everybody bury their shit in the back yard, or some other way to cease sending floaties down sea.

Here is a picture of the mayor of Victoria boarding a plane for Seattle with Mr. Floatie.

She and the icon are apparently going to Seattle to announce the great shit abatement project. 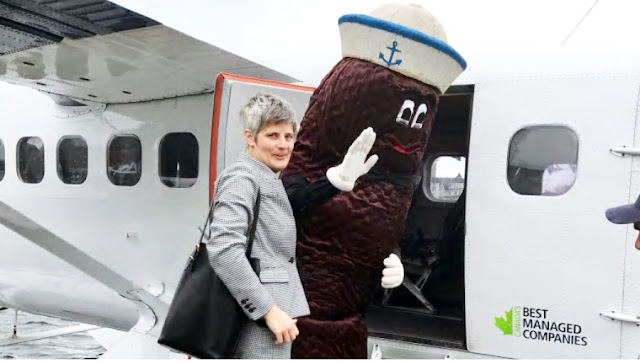 Posted by Noel McKeehan at 9:54 PM