Mark Zuckerberg figured out that if he could get the 30 or 40 percent of the population of the United States that are Cretins to sign up for his service he could pull off an amazing secondary level metamorphosis.

And it has worked.

Here is the rest of his plan: if he could get all the rest of us to also sign up, the little component of  Cretin that lurks in each of the rest of us, when exposed to high test Cretins, would come out to play and would cancel out whatever redeeming characteristics we might have had before the exposure/metamorphosis; at that point we all become indistinguishable from real full blooded Cretins and a giant Fête des Cretins ensues.

(We used to call such things cluster fucks, but Mark is a real upscale guy so he translated it to French; it should not be confused with a zombie cavalcade - zombies have redeeming characteristics.)

"What an advertising opportunity; probably worth billions".

Mark said to no one in particular.

And then there were billions and they had a giant cluster - pardon - Fête des Cretins as a four color graphic backdrop.

And we got donnie.

I realized this while re-reading several of my recent blog posts.

Mitch McConnell is the one in the middle, between Lindsey Graham on the left and Ted Cruz on the right. 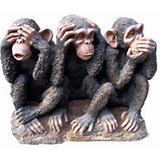