Lettuce Time Is Ending; However …

Today was the first time in three months that the lettuce wasn’t harvested for the evening salad.

Today it’s going to be soup.

We are going to use the recipe from Chalet Suzanne – a place in Central Florida that we used to go to to stay in re-purposed chicken coops and to have those little bitty potato pastries – rolls one might call them – and cream of romaine soup.

Suzanne, so the legend went, was the widow of an Eastern Airlines pilot.

We never knew whether that was true; we never met her.

I always had their filet mignon.

I have no idea what that might mean; but I liked the euphony of the phrase.

So why would I say anything about the moon in relation to Chalet Suzanne?

That soup – in cans – went all the way to the moon with our astronauts.

Even on earth it was so good it was scary.

How can a soup that is so good that it went to Luna with America’s Grande Explorateurs be made out of romaine leaves?

But that was all then.

And this is all now; now we have donnie, and he spoils everything; but we need to keep some perspective.

So I just won’t let ce con spoil my post.

Here is the rest of it.

Our lettuce has been bolting for a week or so and we are coming to the end of home grown salads; that is really sad; but if we can ring in a week or two of home grown soups – maybe things will seem to be better.

And the zucchini is just coming on.

Here on the Island there is a joke: the only time of the year anyone locks their cars or their houses is zucchini season.

Our zucchini have just started and we have already twelve harvested.

We have wolfed down three of them; they have an amazing taste when steamed for three and a half minutes.

But you can’t eat zucchini fast enough to keep ahead of that run rate.

Luckily we have a recipe for zucchini soup.

Only six of the twelve are in this image. 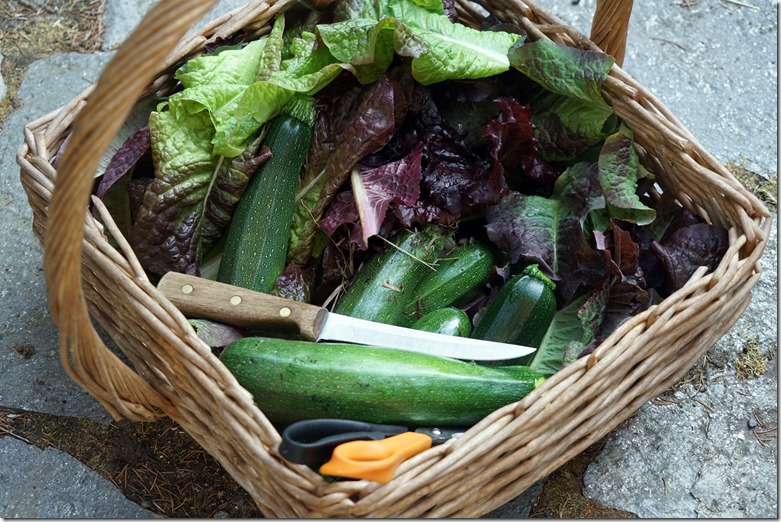