From the IBM Archives: 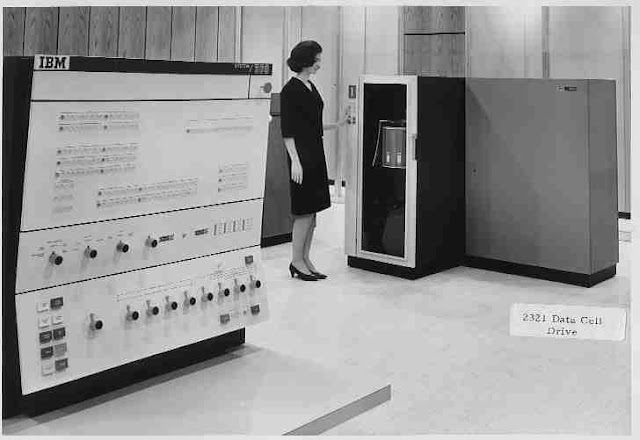 The Data Cell was IBM's first direct-access mass storage device. The design team was managed by IBM's Alan F. Shugart, who also was involved in the design of the first modern hard disk drive with air-bearing heads and later went on to found Shugart Associates in 1973 (which pioneered the floppy diskette) and Seagate Technology in 1979.

(Contrary to the rumor that the Data Cell was designed as a thesis project by an MIT engineering student whose object was a storage system using every known technology... hydraulics, pneumatics, magnetics, springs, optics, ....)

The 2321 housed up to ten removable and interchangeable data cells. Each data cell contained 200 magnetic strips, which were the basic recording media.

Up to eight 2321s could be attached to the IBM 2841 control unit, allowing an overall capacity of over 3GB.

This thing had a robotic arm that, under computer direction, went to a cannister full of mylar strips with data written on them and retrieved just the right one.

Having retrieved it, the arm's fingers wrapped the strip around a cylinder and inserted the cylinder into a read station where, if the strip hadn't been crumpled or mis-aligned, the data was read.

Then the strip was returned to its cell in the cannister - every now and then.

The final project in one of my IBM training classes was to do a timing of a data retrieval problem.

Posted by Noel McKeehan at 9:18 AM