How To Build An iPhone

Or how to build just about every other form of electronics upon which world civilization now depends.

We don't have anything of consequence, including all the weapons underpinning America's vaunted military world dominance, that isn't crammed with chips.

That fact could drive a question: how dominant is the United States in chip production?

After all, if everything we use or might need to use - like weapons of war - can't exist without hoards of chips, we - the US - must dominate the world production of chips, right?

This graph from CNBC seems to belie that assumption. 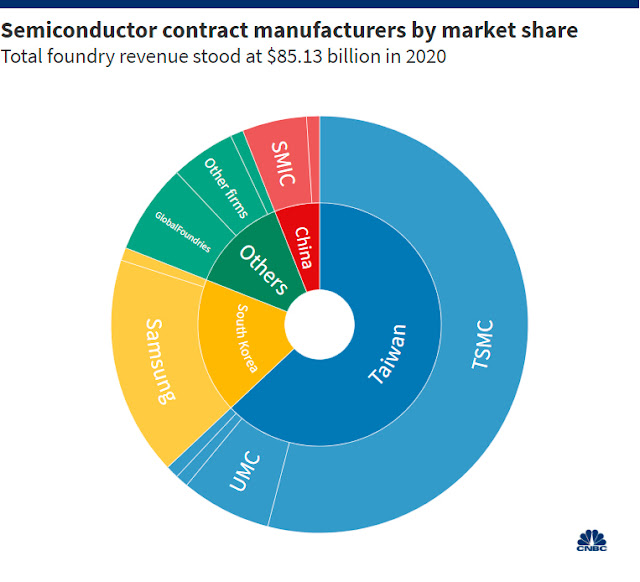 Notice that the United States isn't mentioned on this graph.

So maybe China is more interested in strategy than they are in returning a prodigal population to unity with the mainland; maybe controlling the source of everything that makes life and war in America possible could be a nice step toward Chinese world dominance.

It would only take decades and trillions of dollars (the republicans would say that would cause inflation, though) for the United States to get into the game; TSMC, particularly once under Chinese control will continue to be as far ahead then as it is now, though.

So I guess we can quit worrying about our kids being taught Critical Race Theory: it's too much trouble translating that into Chinese.

Posted by Noel McKeehan at 1:38 PM