The Second Amendment Seen From An "Originalist" Point Of View

And on, and on et cetera, et cetera, et cetera.
Ad infinitum.
Here is the text of the Second Amendment.
"A well regulated Militia, being necessary to the security of a free State, the right of the people to keep and bear Arms, shall not be infringed".
I think Madison was at the end of a long day and was ready to hit the local pub for some drink and a porterhouse steak when he wrote that fateful sentence.
For a man who supplied the basis for what came to be the Constitution of the United States of America to write a non sequitur sentence such as that - slapdash journalism, it would be called in these times, must be embarrassing to him when he thinks about it from his cosmic perch.
But even more interesting is the fact that all the "originalists" - those that want to use the Constitution word by word according to whatever those words must have meant in 1787 - rally around those words and have prevailed in their interpretation of what those words "must have meant" in 1787.
There are a number of linguistic sciences, and there are a number of really old dictionaries that show that language is a fluid sort of art form.
So to try to figure out what somebody meant with some word from 200 years ago is a laughable exercise in futility.
Also I wish they could ask Madison what he meant by those words so he could say to those "originalists" "I don't know; I had a date, and I was really hungry"
As the mass carnages that unfold daily under the "originalist" interpretation of Madison's non sequitur spread blood: blood of children, blood of old people, blood, all, of decent people just trying to be make their daily way, that blood is spread on the floors of hospitals, churches, super markets, hyper markets and just about everywhere, all the time, all across this land one wishes that the "originalists" had never been in the world of the rest of us; but they have been and are in the world of the rest of us;  blood be damned; they don't care about anything - but power and its retention.
So the floors of America continue to flow redder.
Red with the blood of lots of us.
Red with the blood of more and more of us.
And daily flow with the blood of more of us.
Red, to what end, one might ask.
Red to the ends - whatever they could possibly be - of the "originalists".
So, ask Ol' Mitch.
And the boys.
************************************************************
Madison obviously didn't know what those words meant; he wouldn't have written them if he had known; but he wasn't a seer; he was just a thinker; and he put down a lot of thoughts on a lot of paper; and a lot of those thoughts have changed the world for the better; but a few of them - the Second Amendment for example - were just a little shaky; and they have destroyed so many lives that one shudders at the counting.
Warren Burger - quoted from a Jim Lehr Newshour interview with Charlayne Hunter-Gault had some thoughts about the various Supreme Court's rulings on Madison's folly. 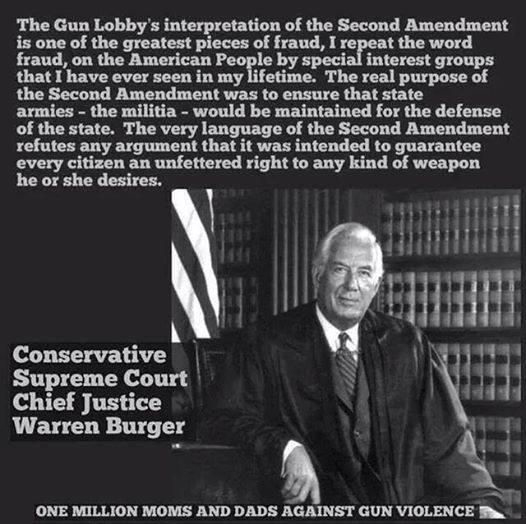 Posted by Noel McKeehan at 8:14 PM