Congressman Bradley Byrne(R Alabama) said in an interview on NPR this morning: This was a one off election, will never happen again and Doug Jones will lose his seat in November because there is no way that Alabama - except in this one off aberration - will ever vote other than Republican.

(This is not a direct quote, but is an accurate approximation of Byrne's response to a question).

So, I asked myself, “since the outcome of elections is thus hardwired in perpetuity in Alabama, why go to the expense of elections?”

“Why not just have the Grand Wizard declare the slate to be seated and direct the Council of Acolytes to endorse and promulgate that slate?”

"We don't need no stinkin' elections in Alabama", I thought I heard someone say in support of that viewpoint. 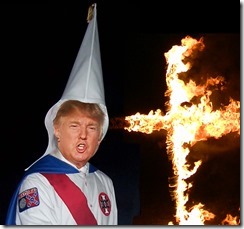 Posted by Noel McKeehan at 8:41 AM