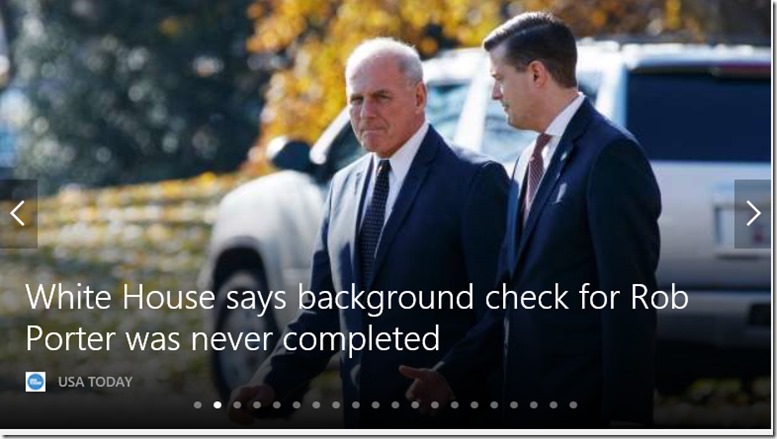 “WASHINGTON – White House officials refused to explain Thursday why Chief of Staff John Kelly and others allowed Rob Porter to stay in his high-profile job even after his security clearance was held up over allegations of domestic abuse by two ex-wives.”

I shouldn't try to know anything about this, but I was four years an intelligence officer, including a year in Saigon  and four months managing the intelligence shop that was on point for the Pueblo crisis; and I had a pretty high clearance – I was at SAC HQ at the end of my inauspicious AF career.

So I think that I might know something about this.

It was not in “held up” status as USA Today reported.

The more accurate story appears to be that Rob didn't have one.

Security clearance, that is.

The FBI was investigating his spousal abuse problems and his clearance was held in official abeyance.

And that is a big deal.

The job Robbie had until yesterday is at the front end of all the information that flows to the President.

That job sorts, organizes, evaluates, eliminates, collates and forwards information - to name a few of the requirements of the job - to the Chief of Staff.

What the Chief of Staff decides to forward out of that mélange is whatever the President sees on a given day.

That stuff that the President sees starts with the White House Staff Secretary.

That person was, until yesterday, Robbie the uncleared.

Or the facts – alternate facts are being drummed up as I write this – seem to point to that conclusion.

Either Robbie was doing all of that without a security clearance (remember crooked Hillary and the great home based server crisis trumped up by donnie the trumper?) or he was privy to nothing, and was shuffling meaningless unclassified papers and passing them on to the (useless in that context) Chief of Staff.

The latter scenario seems to be at least as likely as the former: donnie wouldn’t know an important fact from a frog.

By the way, I think I remember from my time at Saigon, Itazuke, Omaha, Cannon AFB and Goodfellow AFB (I forgot to mention that I was also in the AF Security Service) that giving classified information to an uncleared person is a fairly serious crime.

Posted by Noel McKeehan at 3:06 PM