Solar Panels: The Real Reason For The Tariff 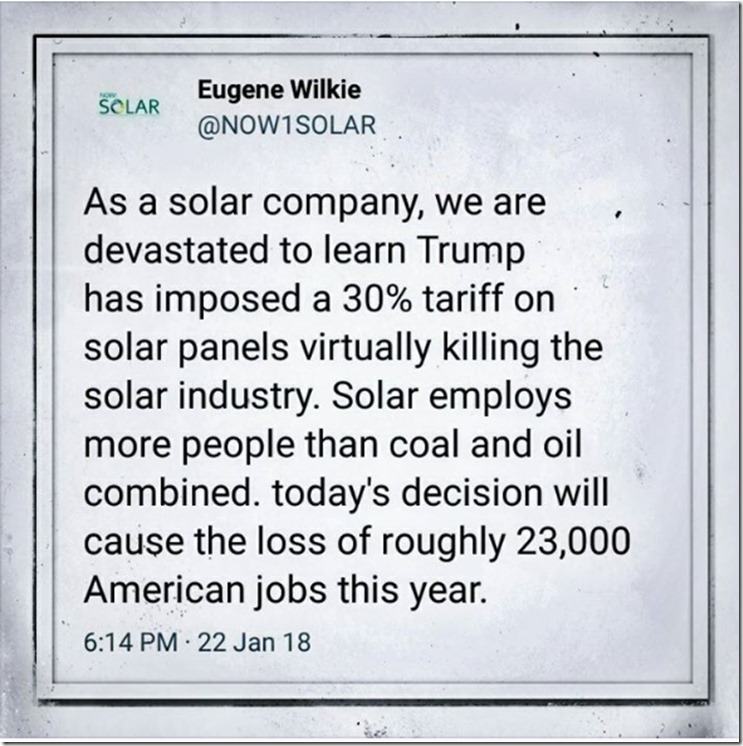 Since I have heard a lot about the great solar panel tariff I was able to respond with this:

NOW1SOLAR  is an INSTALLER, not a MANUFACTURER.

The installer business has been booming for some years due to a 60% drop in the cost of solar panels.

By pumping that price back up it makes the solar option less attractive and - according to several analyses that I have heard – kills off 23,000 INSTALLER jobs.

trump's agenda is obvious: kill off the solar option in America.

That is a nice tactic in the strategy to make coal and oil back into the dominant energy forms that technology and economics have been driving out of business in recent years.

By making solar panels artificially expensive donnie can kill off the technology that the rest of the world is converting to rapidly and keep America forever under a greasy cloud of smoke.

If this company had been a MANUFACTURER they would not be effected positively by the tariff because the Chinese and Germans have paid the entry cost to dominate that part of the solar industry and American companies, due to short sightedness, can't at this late date afford to try to catch up, which they probably couldn't do no matter what their investment.

The only possible good news is that there are a couple small American companies who are manufacturing solar panels with a different material than silicon.

The tariff might help them to get some business competing with newly more expensive silicon.

That might generate a few jobs, but it’s a long way from getting to the economy of scale that allows competitive pricing in a non tariff world, especially with the trump desire to kill the industry.

There are 19,000 actual jobs for miners down in the mine, and that number is shrinking: automation and natural gas have continued to kill off coal mining jobs.

Unless donnie goes after natural gas with a surcharge, automation with a jobs tax and makes coal the federally mandated only fuel allowed in power generation.

All of which are probably likely.

As for solar, major countries like China and Germany are rapidly deploying solar, which is one of a number of reasons why they are both enthusiastic members of the Paris Accords.

And in China's case, it's part of their plan for becoming the leader of the world, replacing donnnie’s America.

Which should be easy.

donnie has started destroying or withdrawing from every organization, agreement or relationship that have been the underpinnings of America’s unchallenged position of world leader since 1945.

So we have already given up the position.

Also,we will be too busy being great again.

Posted by Noel McKeehan at 6:40 PM