One Would Have Thought...

Kilimnik handed the data up the line.

Up the line means Russia.

Once up the line that data got merged with Cambridge Analytica data and Russian data
manipulation alchemy and bots and fake everything, and enough votes were suppressed in Wisconsin, Michigan, Ohio and Pennsylvania to give donnie an electoral college sham.

One would have thought that with such a tenuous claim to the office to which he pretends, donnie would have tried to act like a President - or at least a citizen.

That has not been the case, however.

Since the sham commenced on January 20 2017, hate, racism, white supremacy, calls to violence and telling four of his fellow citizens to go back to where they came from - that being, oddly, America, have been his trademarks as sham in chief.

Given the effectiveness of his calls for mayhem toward our immigrant community - citizen and guest - as was recently attested to by the 22 dead in El Paso, one might worry that his calls for action against the "four" mentioned above, might elicit similar results against them.

I am sure that that has been his intention.

A lesser shamster would probably be called in for questioning by the FBI for suggestions of violence against American citizens.

But we all just chuckle and say "what a brilliant bidnessman".

Some of us do, anyway.

But today he went the final lap.

He has actively aligned himself with a questionable foreign power against two American citizens who are also elected representatives of a branch of our government co-equal to the branch to which donnie claims to have the right to represent.

I guess since he hasn't gotten his acolytes of hate stirred up enough to carry out his directives domestically against "the four", he has needed to enlist Mossad to take care of two of them. 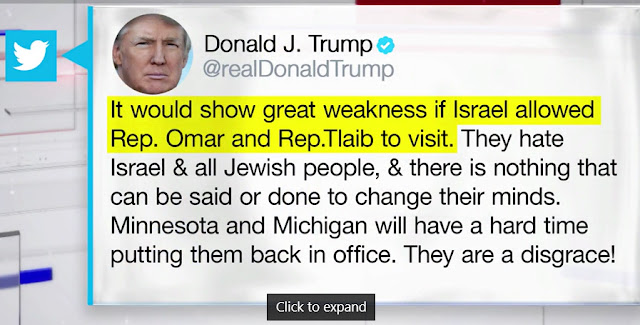 Posted by Noel McKeehan at 3:57 PM