Here is going to be the first of what may, or may not, be an occasional series of science based posts.

Today's addresses a question of hydrology, or circulation, or capillary action; I have run out of guesses; it may well and probably does address some other entirely different question that I either don't know about, can't remember or have forgotten.

But here is the question: if one, after creating two truncated celery stalks by cutting them off some centimeters above their base and some centimeters down from their leaves, puts the stalks in a glass of water, one base down, the other leaf side down, does one lose its refrigerator induced flaccidity, and the other remain refrigerator flaccid, or do they both become more like they were when they were originally harvested in the field?

Stripping this question to it's raw bloody root, the question really is, does celery have a brain, or at least a memory: if one gives celery a water source that is, from the celery's point of view, upside down, does the celery nonetheless drink the water on offer? 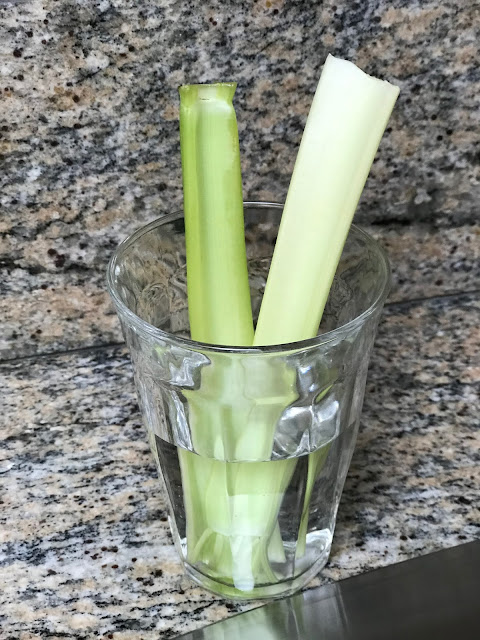 I never would have confronted this potentially world changing question, and certainly would never have had occasion to conduct an experiment in support of its answer if I didn't drink Bloody Mary breakfast drinks.

As I took the first sip of the one I had prepared this morning as the prelude to huevos rancheros I glanced over at the water glass with the celery stalk that I was hydrating for the drink just sampled and heard the question, as if from nowhere: "why did I put the celery in that glass root side down"?

Still pondering that question, I reached for the stalk and found it to be fully field fresh turgid.

Placed root side down caused it to refresh its depleted hydrology.

"But would it have done so if it had been inverted?" I heard from somewhere.

So I got another stalk off the head that was back in the refrigerator and made the necessary surgical alterations, and I placed it in the glass of water leaf end down.

Then I went about making the huevos with intermittent sips of the Bloody Mary already made.

After an extended period I checked the status of the inverted celery stalk but was unable to ascertain for certain its hydrological status; it seemed to be less limp than when I put it in the water, but substantially less field-like than its predecessor in the now drained first Bloody Mary.

The only answer to this impasse seemed to me to be obvious: put a third prepared and inverted celery stalk in the glass and set a timer for half an hour; half an hour was substantially longer than the root side down stalk had had in the glass, so that length of time ought to be enough to allow the inverted stalk time to fully inflate if that were indeed in the cards for a stalk so inverted.

I could feel science history being made.

By the time I made and started to consume the third Bloody Mary I had forgotten completely about my experiment, and by the time I woke up much later in the day there were no stalks of celery to be seen.

Perhaps I will revisit the question another time.

I once made a video of how to make a Bloody Mary, and I recommend it to you:

How To Make A Bloody Mary

Posted by Noel McKeehan at 3:58 PM