The Bee And Me

Today was the day to get the lettuce bed ready for a hoard of lettuce starts.

We aren't much in the farm department: we can even fail at zucchini - failure being interspersed with years when we can't harvest them fast enough to avoid zucchini logs in the mix.

The one thing, though, at which we consistently excel is the production of spring and early summer lettuce.

And today was a rain free, windy, occasionally sunny sort of March day that screamed for getting the lettuce bed ready for imminent implants.

In the late summer of last year, after all the other lettuce had gotten long of tooth and had been pulled out, I decided to leave the arugula to go to seed.

That was a good idea: a dense thicket of arugula, it turns out, in the spring when it is getting tall and putting out flower buds has, over the winter kept down to almost nothing all the grass and weeds that, in a clear winter bed appear over the winter and constitute such a pain in the ass in the spring when one wants to get the beds ready for the new season's planting.

Arugula, in the thickness of a dense thicket, it turns out, keeps down to almost nothing the crab grass and other hard to get out stuff that likes to appear in fallow beds over the winter.

I discovered this as I was pulling out all of last year's arugula.

"What a windfall" I said to no one in particular (I almost always wax poetic when my back is killing me and I am thinking of the joy of having a Bloody Mary) as I noticed that all that was left after the easy extraction of arugula was some chickweed, and not much of that, which is pretty easy to get in the tote that goes to the compost heap.

I had to admit that this was a good deal.

I had had, for most of the preceding summer, the peppery leaves of the summer arugula crop in salads and sandwiches and, for most of the winter had had the peppery leaves of summer arugula's children in my winter salads and winter sandwiches, and now at the threshold of spring I had the advantage that summer's children had been so dense that grass and other pains in the ass had not been able to take hold.

"I like that" I heard myself saying to no one in particular.

There was more, though: somewhere early in the arugula extraction I had become aware that I was not alone.

There was a native honey bee nosing around the arugula, hopefully nuzzling the not yet open flowers in search of nectar.

He looked pretty much like this one except that he was wandering around looking for a flower whereas the one in this picture has his nose buried in a summertime thistle. 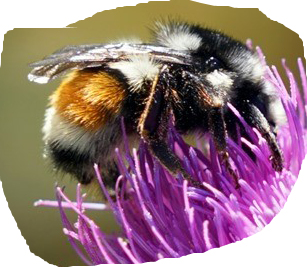 I felt a kindred spirit: he wanted nectar; I wanted a Bloody Mary; I wondered if his back was hurting.

I went back to gardening and forgot the bee.

But not for long.

I heard a dry wispy voice saying "Noel, leave that one with the almost open flowers".

Taken somewhat aback, I glanced around for the source of the voice and discovered that it was probably the bee who was sitting on the cuff of the right sleeve of the REI jacket that I wear for outdoor chores (it has several holes burned in it from various spring cleanup burn piles).

I had been about to remove the last of the arugula thicket; I scanned the stalks left and saw one quite robust one with one open bloom and a vast array of yet to open buds.

Posted by Noel McKeehan at 4:47 PM