When Weapons Were Art

This is a segment of a cannon at Les Invalides, the hospital that Louis XIV built to house and nurse all the casualties of his trans decades wars that were supposed to make France the dominant power on the Continent.

Unfortunately for Louis a minor European prince from the house of Nassau in the Netherlands, or Holland, wanted there to be a different world order.

His name was William of Orange.

He was married to the first child of James II of England; her name was Mary.

Mary didn't have a lot of use for her father, and neither did the people of England, so when William invaded England and her father ran off to France, Mary was happy to be co-monarch with her husband who became William III, king of England.

You've probably heard of William and Mary which is an educational institution in Virginia.

It's named after them.

But back to the point - if there is one here - of this little posting: William of Orange really didn't have much interest in being king of England, but he had a big interest in stopping Louis XIV's ambition to rule all of Europe.

As Stadtholder, William didn't find fealty to a French king anything that appealed to him.

He had hatched a plot that, if he could get England to stand up to Louis, he, William could probably ally his fairly robust military with a lot of other non-major European powers and stop Louis (this is all, by the way just a preview of the same story a century later with Napoleon and a century later than that with Hitler) and have a shot at stopping Louis.

And what better way to get the English in the fray than to be its king?

So when James II kept becoming more and more of an unmitigated asshole, and the English people wanted more and more to be rid of him, Mary whispered in William's ear and history was changed.

So when you look at this image of part of one of Louis' cannons think of William and Mary - the people, not the college. 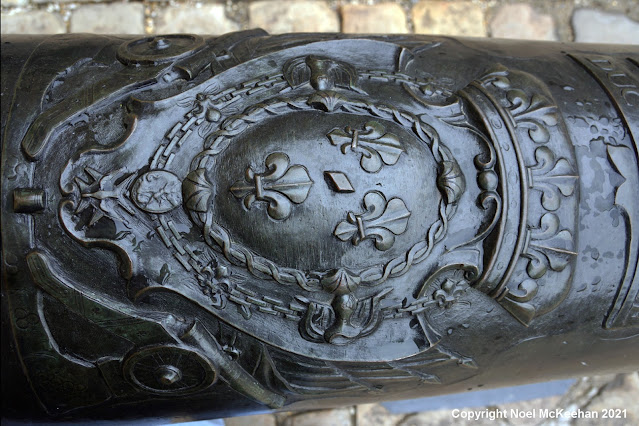