The weekend is here.

I woke up and heard a non-Sunday Weekend Edition.

Audie Cornish and Tamara Keith were there.

I guess she doesn't cover debacles in progress.

On 11 August, two thirds of the way through a list of recent and in-progress miseries in a post titled "Potpourri For 11 August" I said:

"As I write this.

Taliban has run a blitzkrieg.

Kabul will fall in 90 days.

That is probably optimistic.

Kabul will probably fall over the coming weekend."

So I shouldn't have been surprised; but I was; I seldom have had my predictions be that accurate.

But let's move closer to home.

Here is a map of the recently released 2020 census. 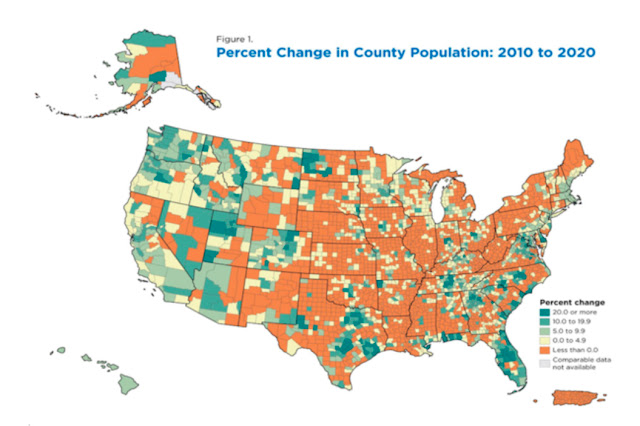 It's interesting that Oregon and Washington seem to have the most consistently sorta prosperous rural areas.
And the Washington map clearly shows wine country.
Bend stands out on the Oregon map, and Astoria seems to be doing well.
The highest growth in Oregon was Bend and in Washington Tri-Cities.
Also, in Tennessee, the Nashville effect is pretty obvious.
Florida is just weird:  generally massive growth, and, I guess, prosperity, but they vote for the dark side.
And you can see Air Boat Country clearly from the graphic.
Posted by Noel McKeehan at 10:50 AM