Fish Seen From A Bridge In Quimper

Back a number of years my wife and I spent a little over a month in in Bretagne - Brittany - in English.

Grande Bretagne - we Americans usually call it England or "the UK" - was where one of Bretagne's native sons migrated to -Lancelot - and where all of the Arthurian legend took place.

At the end of our sojourn - rental car, no reservations (it was late September and all of October, so we had ocean front hotel rooms whenever we stopped for the night on some place on the coast of that magical place) we ended up somewhere in the inland middle of Bretagne in late October.

Almost immediately after entering the place, (it REALLY, looked like a Shakey's Pizza restaurant in 1957 in Northeast Portland, on Foster Boulevard) big, long tables - not as long as Putin's table, but long - and benches of a size to allow lots of people to sit at each table, the word got around that we were Americans.

Apparently that was a rarity in Merlin's Forest; we immediately became objects of interest and proffered conversations.

My wife speaks French so she was off on her own frolic.

So I was pleased to note that the guy next to me on my bench at the table spoke American English.

It was interesting: I got so excited by his English that I started speaking at a normal American cadence; he almost immediately said "lentement sil vous plais"; I couldn't tell him the irony of that phrase that I had uttered so many times in France in my various French sojourns.

But we went on with me speaking slowly.

After an apparently mutually satisfactory period of exchange he looked at me deeply and said "what the fuck is it with this Boooosh"?

Prior to the end of October we had spent a couple of days in Paris and then taken the train to Rennes where we picked up a car and went to Auvranch for the night and stayed in the Hotel Patton; it was at centre ville and there was a round memorial in the street in front of the hotel.

In the memorial were a couple of tanks and several American flags.

The proprietors of the hotel thanked us for the Normandy invasion.

That was in the Twenty First Century.

When they discovered that we were launching into Bretagne they said that they needed to make reservations for us in Morlais - our next overnight - because we were still at the edges of the "season" in France, that time when all the city dwellers go to the country.

So we had a place to stay in Morlais, and that was good.

The next day we drove to Quimper.

Which is the point to this long story.

I was standing on a bridge over some waterway in the center of Quimper.

Looking down I saw a bunch of fish.

I asked a guy who was close to me on the bridge what they were.

"We don't catch them here, we catch them in the ocean, so they know that they are safe here.

"We call then bar here on the Atlantic; on the Mediterranean we call them "loupe" (wolf); they are the same fish, but I think the loupe is the better".

I have had both, and they both, properly prepared, are sublime, but I prefer the the wolf aussi. 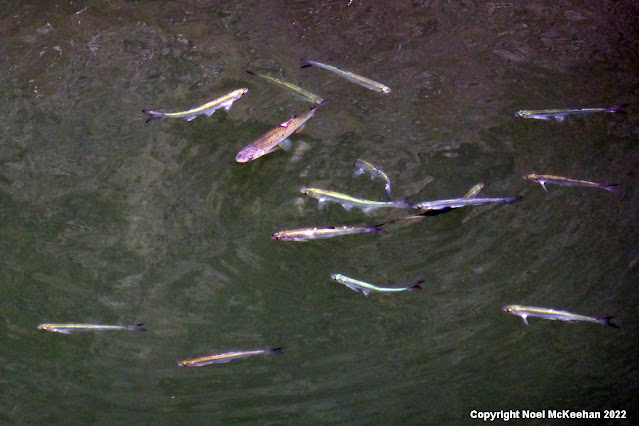 Posted by Noel McKeehan at 8:25 PM