In a recent post, The Spine Of The Tuileries , I wrote about magic properties that I feel in my deepest being to be inherent to that ancient water turned to stone; we call it flint in English.

That post contains a quote from Screen Saver a memoir I wrote once.

This post has a quote from A Curious Confluence, a novel that I wrote once.

"It was the skeleton of a hand.

"And in the hand was a piece of something.  Closer examination showed it to be a piece of flint. The shore upon which I had been walking was strewn with them.  They were the only things more numerous than the shells of long gone clams.  But this one was in the grip of the skeleton of a hand.

"The hand had the flint held in it.  The fingers of the skeleton were wrapped around it in a manner in which the fingers and the thumb were all vertically aligned rather than clenched in a fist.  The flint protruded just slightly above the finger tips and the tip of the thumb. The glint had been that protruding flint.

"For no reason that I could have given if I had been asked, I had an overwhelming desire to take possession of that piece of flint.

"I took hold of the longest of the skeletal fingers and tried to bend it out to release the flint from the hand’s grip.

"It did not yield.

"I had an almost beyond bearable pain in the middle finger of my left hand". 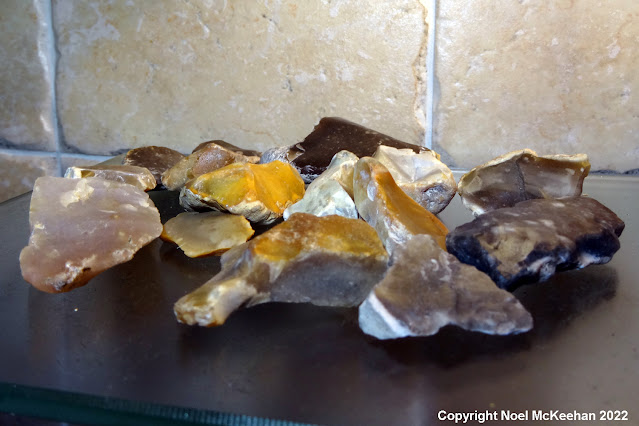 Posted by Noel McKeehan at 8:29 PM