Putin has unleashed unfathomable horror on a sovereign nation and its people.

Because those people didn't all give up and immediately accept an illegitimate overlord, he has unleashed all the forms of mass destruction available for modern warfare on hospitals, churches, apartments and residential subdivisions, killing and maiming untold numbers.

And the worst is yet to come.

Because Ukraine is not going to give up.

They know Groszy is their imminent fate; but they don't care; they are going to fight.

The EU, NATO, the United States and Japan have been surprisingly united and have unleashed sanctions of a type that have brought Russia to an economic standstill: its puny economy is punier today than it was ninety days ago.

And that has Putin in a corner.

So he has made vague nuclear threats based on the same justification he has used to get him in this mess in the first place.

For some reason I became curious: has Israel joined the rest of the civilized world in the sanctions.

So, I Binged that question,

Here is what I found: 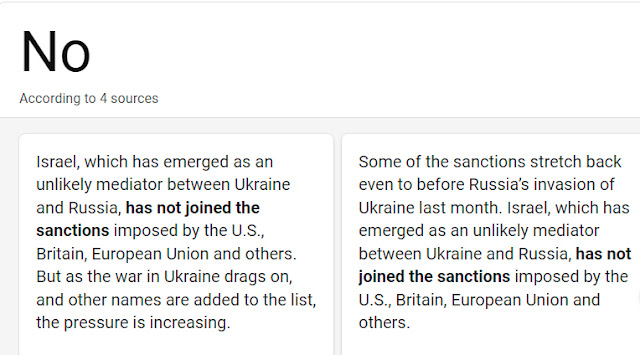 I guess, after seeing the mayhem and havoc that the Israelis have wrought on the Palestinians for 74 years, that shouldn't surprise me.

Holocausts, after all, are uniquely Jewish.

Posted by Noel McKeehan at 3:36 PM