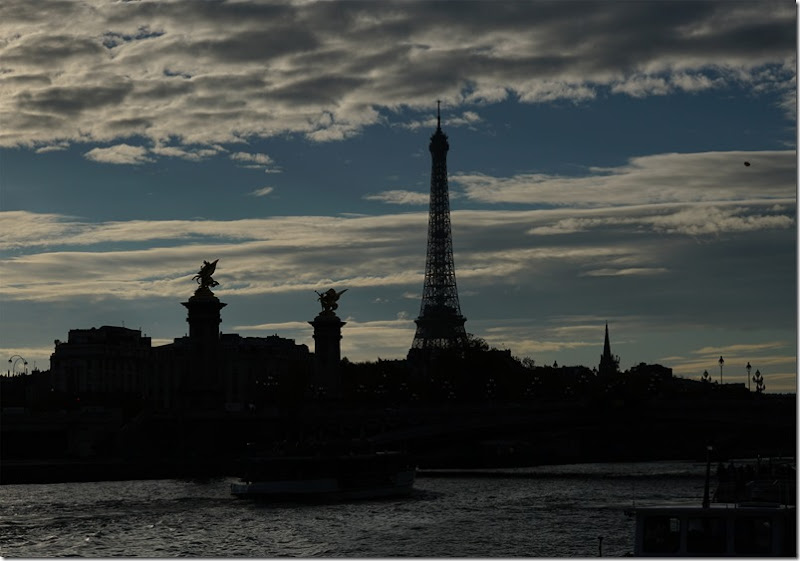 I have a block against remembering whether she died in 97 or 98.

She would have liked Paris.

I can never remember which.

But life goes on.

I got here on Sunday.

The Island, it turned out, was blocked to vehicles.

Since taxis fall into that category – vehicles -  mine had to abandon me at rue de Rivoli and rue Pont Louis Philipe.

Good thing that is my 'hood, so I knew the way to the apartment.

But it was a slog of sorts; I seem to always have slogs of sorts on day one of my Paris sojourns; so it was ok; it was necessary almost; after all, the odds were really good that I was going to be able to open the door to the apartment on the first try; I have stayed there two there two other times; the first time I wrote A Curious Confluence.

As an aside, Louis Philipe had two kids who were colonels on the Union side in the American Civil War.

The troops really liked them.

I probably would have liked them.

I probably would have liked their dad.

He was the last king of France, if I’m not mistaken.

Which I may well be.

He spoke English with an American accent.

I guess that pissed off the Brits.

But that has always been pretty easy to accomplish.

I think Louis was sort of elected, but he got to be king anyway.

That’s pretty much the type of Presidency the French now have in place.

I never heard him say “l'etat c'est moi” but I bet he thought it.

Sunday was about 70 degrees and sunny.

So I did about eleven.

IOS told me that.

I’ll bet Louis and his kids would have killed to have IOS.

De Gaul is dead too.

But his constitutional monarchy – and elected king – endures.

I had dinner at La Citrouille.

They were hanging up Christmas lights.

Even though it was warm.

They seemed glad to see me again.

I was certainly glad to see them.

It was early even though I normally like to eat when the Parisians do, but I was ready to crash after keeping myself occupied and awake (walking eleven miles) so I wouldn’t have jet lag for the rest of the sojourn so I got there a little after six; in spite of the earliness the place got two thirds full in the hour and a half I was there.

That makes me happy.

I really like La Citrouille and wish them longevity.

I can remember that.

I celebrated my 70th birthday there with my wife and my son and my daughter in law.

I think I remember that.

Aubrey and Maturin and calvados will do that to one.

I went to le Marche de Maubert Mutualité  and bought a Tradi, a croissant, fromage blanc and rocamadour and some clementines and had a great breakfast.

But I call that breakfast or nearly so.

And near misses are the spice of life.

I think Franklin said that.

Or maybe it was Twain or Shakespeare.

That was kind of late.

But I needed some miles.

After all of that fromage blanc.

I had no idea where I was going to go.

I went left at the apartment door and assigned auto pilot for a few minutes.

That was down the quais.

When I got to Pont du Carrousel I was drawn across the river.

The concave dish of a floor in the pavillon has been re-engineered.

It is now slightly convex.

That would have changed markedly a key occurrence in A Curious Confluence.

There would not have been that massive dish of blood.

But what the hell.

The reason I crossed was because I thought it would be good to walk through Les Tuilleries.

The steps down to the fountain are blocked by another of the City’s never ending renovations, but I got down there by the pietons bypass.

And that was good.

It was good because there were a lot of arctic terns in the fountain.

One of them might replace Jacques the mouse if I ever write another novel.

I was really glad to see that all the young women of Paris still all have the same facial façade ( a description redundant perhaps, but stylish, I think) when they walk among us.

It is a look that is a mask that has no motion, nor slippage nor perviousness.

It says “I know what you are thinking and I’m having none of it; so fuck off”.

I found joy in that lack of change on the streets here.

Young American women have a look of similar function when they walk about: “I’m not putting up with any shit from any of you asshole men, so fuck off”.

Seven miles and no pigeon droppers.