Yesterday was sometimes sunny sometimes cloudy but not rainy.

It was going to be a good day to start out in le Jardin des Plantes and then see where else I decided to go.

I was thinking that the somewhere else might turn out to be a long walk up Canal St Martin etc. with a right turn at rue de Crimée and on to Parc des Buttes Chaumont.

Walking on the river level to Pont Austerlitz was pleasant as always.

I only experienced three near misses from bicyclists.

And the newly returned cormorants that like the pilings around the police boat dock were in the mood to pose for the camera. 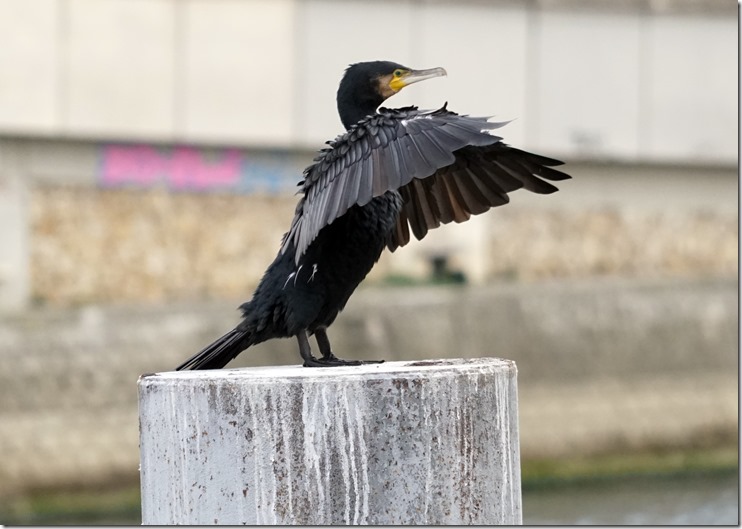 So I was feeling pretty photographically fulfilled before the day’s walk had really even started.

Since le Jardin des Plantes is one of the places I know to have a population of parrots, I was hoping I might get a shot or two of them.

Paris parrots have been my prime photographic quest ever since the first day, five years ago almost to the November day, in Parc Montsourris that I first saw one.

I have never gotten a really, really good picture of one.

I have always forgotten to make some last minute adjustment to the camera, or I had the wrong camera with the wrong lens, or – something, always something.

Today, I believed, was different.

I had the best camera with the best lens and I had it set for the light conditions of the moment and the focus mode set to “parrot”.

As I entered the Jardin I started listening.

I always find parrots by hearing them before I ever see one.

Shortly into the Jardin I began hearing their shrieks and wandered in their direction, which was to a densely treed area on the zoo side of the Jardin.

I could hear them but not see them.

The trees still have enough leaves to make seeing a bird in them difficult; in any event the trees are so tall that even if I did see one it would be beyond optimum reach of my lens.

But I kept following their sounds.

For no reason that I can proffer, other than instinct, I glanced away from the direction of the shrieks, to the left across the Jardin’s center of plantings to a little thicket of a couple of evergreens with red berries.

There was a flash of green as a parrot landed on the outside of one of the dense little bush-like trees and settled for a moment.

And I got there in time.

And I got a picture that appeared to be going to be the one I have been questing after. 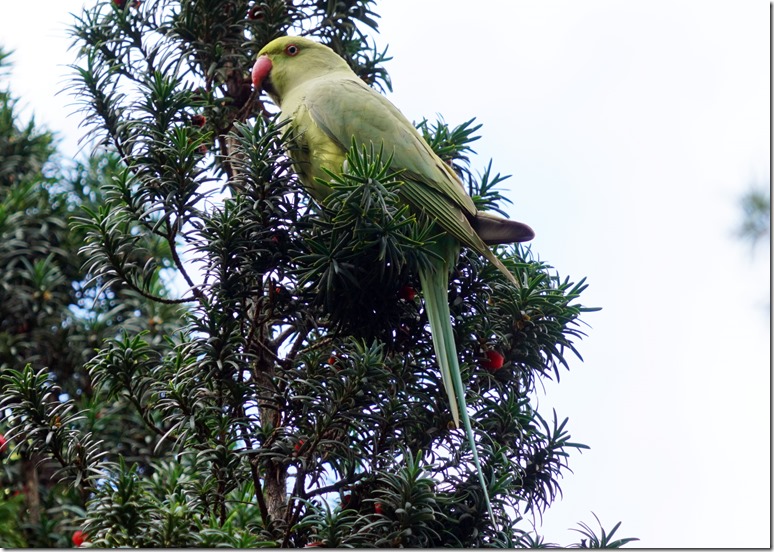 And that was it.

I only got the one shot.

And finally, after five years, I seemed to have everything set to take advantage of the fleeting opportunity.

I waited around for several minutes but the parrots – there had been two or three of them – once flown weren’t returning.

So I wandered back in the direction of the ones I had been looking for earlier and walked and listened and heard but did not see for the depth of the Jardin to its inner depths.

And then I went right and came back along the zoo.

I heard a lot of parrots, saw flits of a few but didn’t get any chances at shots.

I was completing the circumnavigation of that part of the Jardin and was nearly back to the main gate where I was planning to cross the river and walk up to La Bastille when something made me stop.

And I heard, not a shriek or cackle, but a continuous crunching.

I looked up and I was under a tree filled with parrots.

They were all feasting on some kind of seeds that they were getting out of the dried pods on the tree.

I got a lot of pretty good pictures. 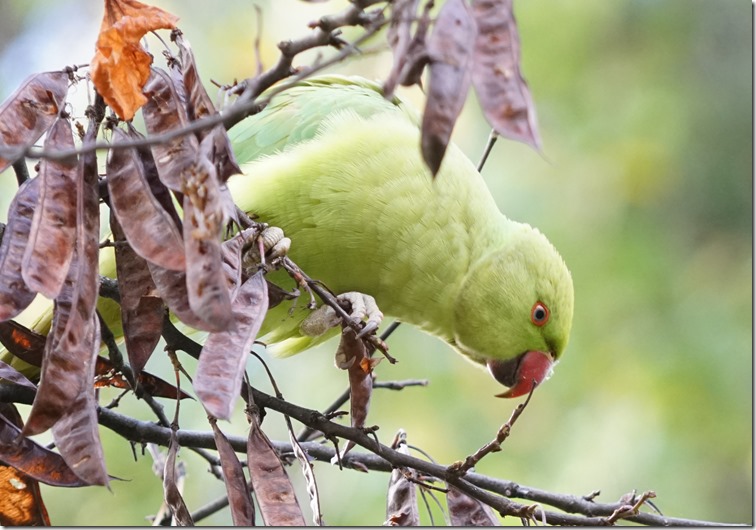 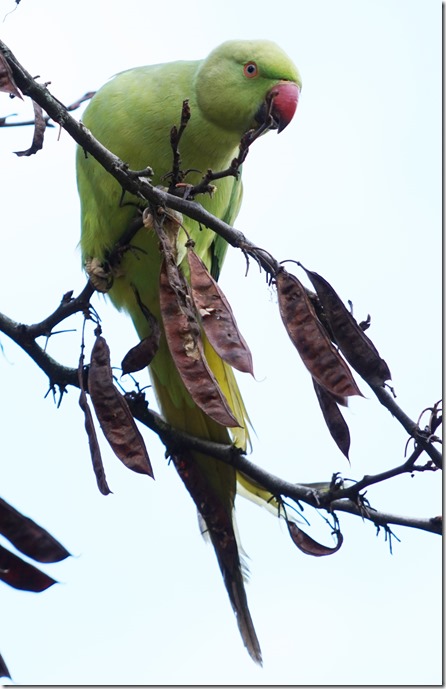 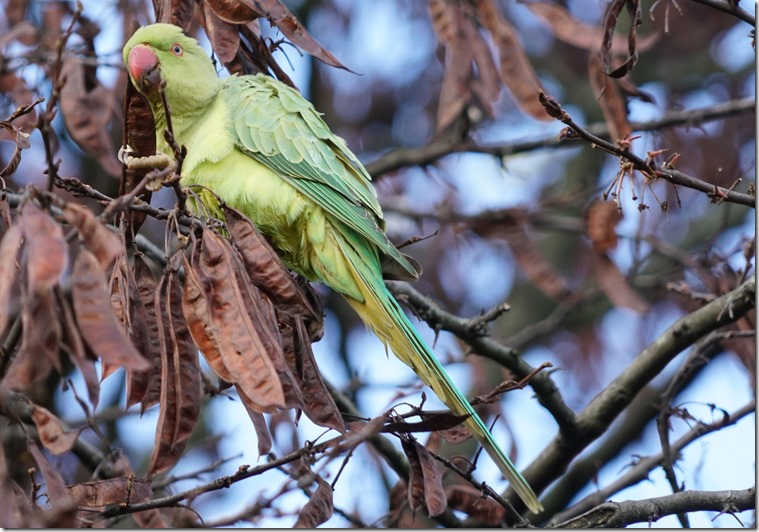 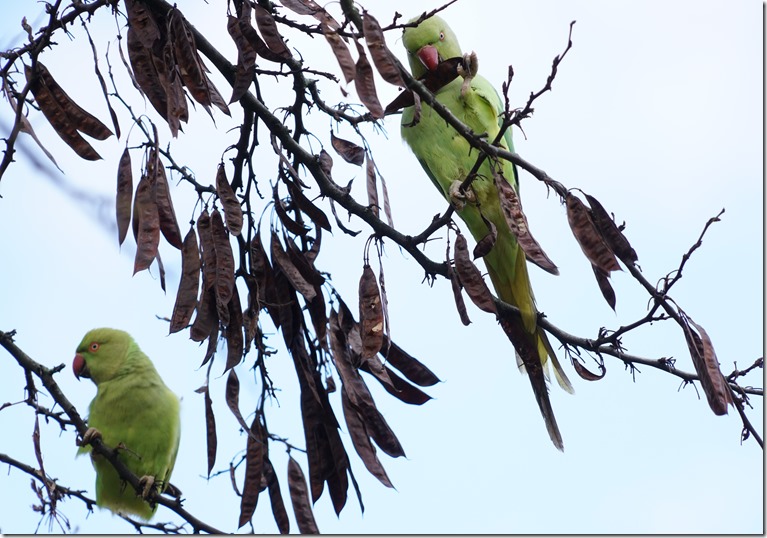 Posted by Noel McKeehan at 1:31 AM