More About The Ol' Pigeon Drop

In yesterday's post I had an actual image of the Pigeon Drop and a little bit about why I call the ancient sham known as the ring drop the Pigeon Drop.

I also included a snippet from a book that I have written called A Curious Confluence.

As it turned out the Pigeon Drop and one its practitioners became a significant part of the plot in A Curious Confluence.

So here is a larger snippet from that novel; this is the plot point encounter.

"Remember I said that I had given up trying to get pictures of the pigeon droppers?

"There is a reason for that.

"Actually there are two reasons. One is just that it’s just too damn hard catching their image. I have a number of blurred barely identifiable encounters, none of which amount to a documentary hill of beans. The one exception is the first one I got when the guy came up to me by Thomas Jefferson.

"But the other reason for my abandonment of the project is probably more interesting.

"Several days ago I went out specifically to harvest images of pigeon droppers. To that end I chose my route carefully, having by that time in this residency noticed what appeared to be patterns to their lurks and haunts.

"En route I changed my mind and crossed at Pont St Michel to give myself a little bit of a leader on the first likely encounter (the droppers seem to like to start more toward Le Louvre).

"As I walked along, it being a really nice day for a few days before full winter, I lost track of what I had been supposed to have been doing. There were some just-right-yellow poplar leaves, and the river was absolutely sparklingly spectacular, and every boat seemed to be a candidate for a Saturday Evening Post cover.

"So I was many mind-space miles from thinking about the old pigeon drop gambit.

"I was composing and taking pictures and savoring a beautiful day on the right bank of the Seine, in the shadow (the sun was from the other direction, so there was no shadow, but the allusion has great literary appeal) of Le Louvre when suddenly my concentration was broken by a rather large humanoid at my side thrusting his hand with a gold-like ring in it into my field of view.

"I immediately snapped back into pigeon dropper image harvesting mode, put the camera next to his hand and pulled the trigger.

"That did not please Gargantua.

"He started asserting in a raised-level voice – something. “No fucking way” came to mind, but I really couldn’t get anything he was saying. I don’t think it was French.

"But I didn’t need a dictionary to know the gist of the message.

"The problem for me immediately had become – I didn’t really care whether he liked the fact that I had taken a picture of his hand – that the picture I had taken – he obviously believed – gave him the right and the access to pursue the real point of the gambit, which was to extort funds from the mark, and I was the mark.  In the case of an unapproved photo, who knew what the endgame might be?  In any case, I had, inadvertently, stepped into the snare.

"So I yelled at the top of as well modulated a pair of baritone male lungs as I could summon “God damn you, you son of a bitch”.

"He spit at me. I think he missed. I threw a punch, hitting him mid chest. He was alarmingly lean. I felt as if I had struck a rock.  I was so angry that I just was ready for a fight, which totally out of character for me. So I was surprised that all that he did was indulge in some eastern European-sounding guttural utterances. I said some things in riposte that I can’t remember now and he reciprocated.

"And then not long after that he moved off down the quai.

"I took some more pictures of the poplars, waiting for my heart rate to drop below three hundred.

"I could see the dropper not too far up the quai. There was no way I was going to backtrack or try to elude him. I struck out in his direction.

"As expected, I fairly quickly came abreast of where he was standing. And he knew that I was there. As our eyes met, and he started spewing whatever language it is that he speaks at me, I threw him a snappy, Air Force officer salute.

"That seemed to throw him a curve, because he came over and put his arm around me and started saying things that seemed to have “monaie” as a major and recurring word. “Bon chance a vous” I said; and the torrent from him grew even greater. He kept asking me in English where I was from. “Are you English?” I just laughed.

"By the time that encounter had been closed out, I had discovered – I think – that he was from Romania, and that there was no luck without money.

"If I encounter him again, which I assume I will, maybe I will find out if my feeling that we parted as sort of mutually respecting human beings was, in fact accurate.

And that is the more compelling of the two reasons that I am out of the game of trolling for droppers." 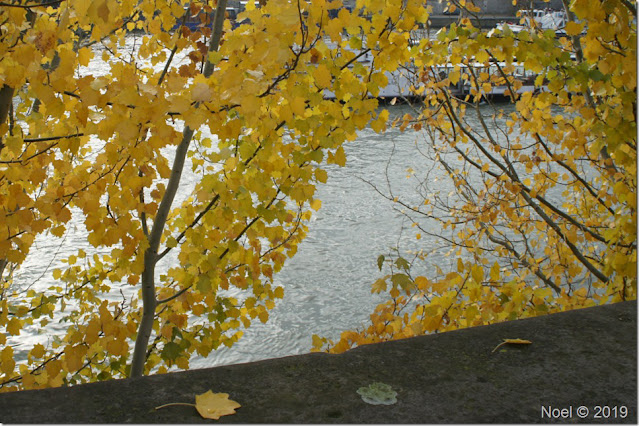 Posted by Noel McKeehan at 9:17 AM