Pigeon Drop Is Alive And Well

There is an ancient gambit called the "ring drop".  I call it the pigeon drop because I once saw a much grander, but conceptually identical, sham presented as one of the segments of 60 Minutes.  I have spent days trolling the quais of the Seine to try to get pictures of it in action. Here is one of the few I have ever gotten that can be seen clearly. 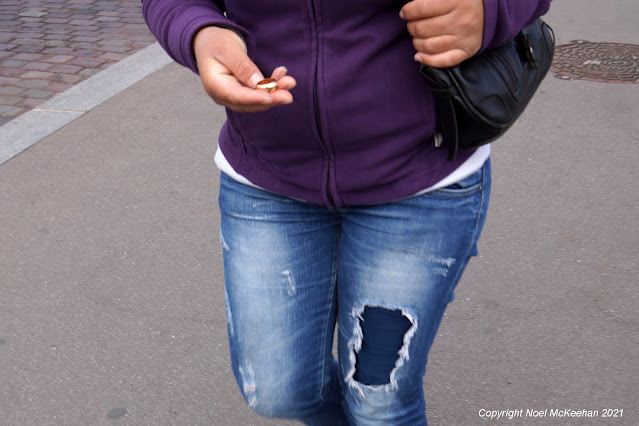 I have been so fascinated by this stupid sham over time that I even have a brief mention of it in A Curious Confluence.

"The first time I ever saw the Pigeon Drop attempted was in 2006 on or about Quai Voltaire. That was in August. I was back in November of that year and they tried it again. By then I really had the adversary role down pat: "Vous avez bon chance, Madame!" I said to the drab little woman who was conducting the scam.

It has been tried on me a number of times since. Today I had decided was an ideal day for image gathering on the banks of the Seine. I set out about 1330.

I kiddingly wondered to myself if I would again be pigeon-dropped. "No, not after all this time" I said to myself. A distance down the quais, I was just standing and wondering if I should take yet another series of images of the statue of Thomas Jefferson when I was suddenly aware of a small dumpy brown woman attired in some kind of trademark eastern European garb sort of floating into my view as she stooped down on toward the sidewalk.

She was stooping on toward the sidewalk because she was groveling down to pick up a shiny gold ring. She rose to her full 4 foot 8 stature and said to me, "Voila! Regardez que j'ai trouvé!" I was so excited. The drop was on."

Posted by Noel McKeehan at 1:14 PM