The real point to having taken this picture is that the sign says that you get to Mitterrand's library via the foot bridge Simone de Beauvoir - Jean Paul Sartre's female life companion.

But that really isn't the point.

From the realm of Noel's never ending obscure interests the real reason for this image's post is that Passerelle Simone de Beauvoir lets one cross over the Seine into Parc de Bercy.

Parc de Bercy is a fairly recent addition to Paris' parcs I learned recently when I read The Seine, a book by Elaine Sciolino.

But even that isn't the point of this image posting.

The real reason is that in the book Elaine tells about a 5000 year old settlement that the workers uncovered while making Parc de Bercy.

Hearing a contemporary author describe the archeological findings that perfectly described "my village" in "my book",  I having no idea at the time of writing that book that there even was, or was ever going to be a Parc de Bercy was, frankly, unnerving.

The only disparity is, I had the settlement on Isle de la Cité on the site where Our Lady later raised her cathedral - burned to the shell recently.

Maybe there was more than one such settlement 5000 years ago. 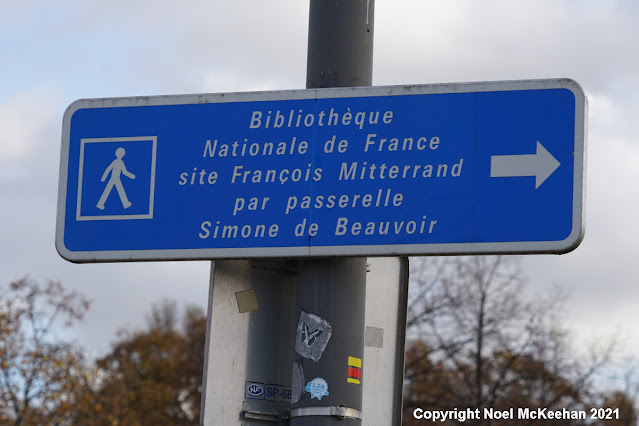 Posted by Noel McKeehan at 9:10 PM