Senator John is, apparently gifted with a very high IQ. 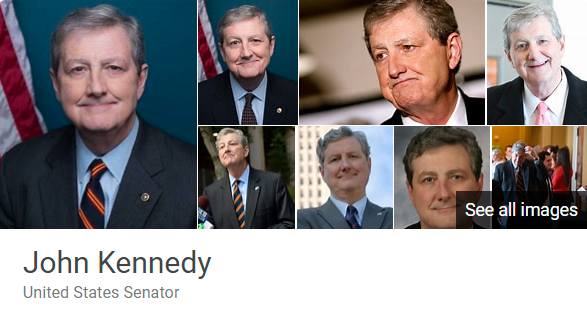 No wonder he looks so down at the jowls: he has spent most of his life being educated.

But there is nothing wrong with that.

Here in this post that is just evidence for my case.

And my case is as follows.

When I was a pre-teen child I listened to a lot of radio: Red Skelton, Jack Benny and all the mysteries and melodramas of the time.

One of the never ending clichés of that era was the Southerner as the rube; it lived in parallel with the Black American as the rube; in retrospect that juxtaposition is probably PHD dissertation material; but I mention it only because it is evidence for my ultimate conclusion, yet to be revealed.

Move the clock forward from the 1950s.

It was the 1960's and I was in the United States Air Force; I was a Second Lieutenant; I was in a mélange of humanity that should have been studied - somewhere - and it had a large Southern component.

I was from Portland.

I had never known a Southerner.

All I knew about them I had gotten from radio years before.

I knew that they were all rubes.

( I should at this point in the post define "rube" since I may be the only person living to whom the word means anything; it means self-impressed Buffoon.)

So in the myriad interactions of which I was a participant, and of which I was an observer - the Southerns interacting with the Bostonians, New Yorkers, New Jersy-ites, the Rhode Islander (we had one of these (Walt Couteau) the Iowans and - I can go on for quite a while, but I won't - all the rest of the demography that gets pumped into the military when you have a draft.

Those "Southerners" always played the rube and they always came out looking like geniuses.

They ran rings around the Harvard et al graduates.

So I know the game that John Kennedy from Louisiana has been playing.

And I shriek at the heavens that he has been allowed to sully the name of JFK with his tragic name-alikeness.

But he has played the rube game with a brilliance which is the least to be expected of an Oxford alum.

You are probably wondering why I have taken the trouble to write all of this.

The reason is because one time I was sitting quite drunk under a juniper tree in Central Oregon.

A really good friend was sitting next to me.

He was drunk also.

So when he said : "have you ever seen an ant lion?" I didn't know how to answer.

In fact, I didn't answer; I just sat there drinking more of whatever it was that I was drinking.

"No, seriously, there is a bug called an ant lion; they dig a conical hole in the sand, and they stay below the surface of the cone, down in the sand and wait for ants to stumble into the cone; when the ants stumble they can't get out because the grains of sand in the cone keep falling down; so, while the poor ant is stumbling the ant lion jumps out and grabs the ant and pulls it down into the sand and has his way with it".

Then he gestured under the juniper and I saw a cone and what he had just described actually happened.

That is how I think of the Southern rube, the role that John Kennedy of Louisiana has perfected: he's just a simpleton from Louisiana.

The southern rube digs his cone of being thought to be stupid by northerners and sits at the bottom and waits for the ants; I saw it so many times in the Air Force that I can't count them.

I think it is a tactic that, if not genetic, is taught subliminally by the Southern Culture; it is a tactic for certain victory in the everyday dealings of the human race in the United States.

Most of what I have seen from Kennedy in the last two years supports the fact that he is, indeed, playing the rube.

And I know, from my Air Force experience, that he has cultivated that image with serious intent.

But, with Kennedy, I have seen the down side.

Sometimes if you play a role too well, and for too long, you actually assume the role as your real identity.

You really become a rube.

Posted by Noel McKeehan at 8:04 PM