Will God Smite Them?

Neither of us had any surprises, but for me that was disappointing.

I had hoped at the least to have found some long lost Jewish blood in me; better yet, I would have cheered if I had some kind of African or Asian DNA.

But all I got was 100% northern European - albeit with more Neanderthal than 86% of other 23 and Me participants.

I mention this because of something I saw on Amanpour and Company last evening.

Michel Martin interviewed Robert Pape about the demography of the recent insurrection.

January 6, 2021 when a mob tired to overthrow our government?

Before I present a thumbnail of that Pape interview I want to link the 23 and Me demographics - I am a boringly vanilla white man, by genetics - with me and what I have always felt and believed.

Somewhere before I had turned teen I said to a friend that "America will finally get where it needs to get when all of us Americans are of some sort of coffee colored hue"; and I believed that; and I still do; and I have never been able to shake out of my world view the excitement that I feel when I look forward to that ultimate amalgam.

When it finally happens it will be a first ever thing, built upon a lot of other first ever things; among those things: the American distillation of the Enlightenment, British Parliamentary rules and procedure, French Thought, and the words:

With conquering limbs astride from land to land;

Here at our sea-washed, sunset gates shall stand

A mighty woman with a torch, whose flame

Is the imprisoned lightning, and her name

Mother of Exiles. From her beacon-hand

With silent lips. "Give me your tired, your poor,

The wretched refuse of your teeming shore.

Send these, the homeless, tempest-tost {tossed?} to me,

I lift my lamp beside the golden door!"

I have no idea where I got my amalgam viewpoint; it wasn't dinner table conversation - I lived in a family who really had dinner together every night -  but this plaque on Lady Liberty's statue sums it up; maybe I am a shard of the bronze left over from her immense stature and creation; maybe I am a messenger from god, in whom I would have a lot of faith if I thought that I had gotten my amalgam from him or her or it or them.

But I fervently, almost genetically, believe that America and its pot of the mix is the salvation of the world.

So when I hear from Professor Pape that the attempted overthrow of the Government of the United States of America was not conducted by militias - and I have sat next to lots of them (militia nuts) over the years on stools in bars and grills across the land, so I have some idea of what they say and how they think; and therefore I have always been waiting for them to make their move, and therefore am totally flummoxed to find that it wasn't them: it was us, the old white men who have done pretty well, thank you, who tried to undo our government and our Constitution on January 6 2021 - I have to raise my hand and say two things:

"We are so screwed."

Those people really think that a multi cultural, multi racial, multi viewpoint America threatens them and their spawn.

I live in a universe elsewhere from those people.

They feel threatened by the fact that our system attracts everybody to join in and prosper.

They think only white "christians" deserve to live here.

And they have chosen to unleash havoc upon the land to save the white christians (all I can see is men in white hoods and white sheets). 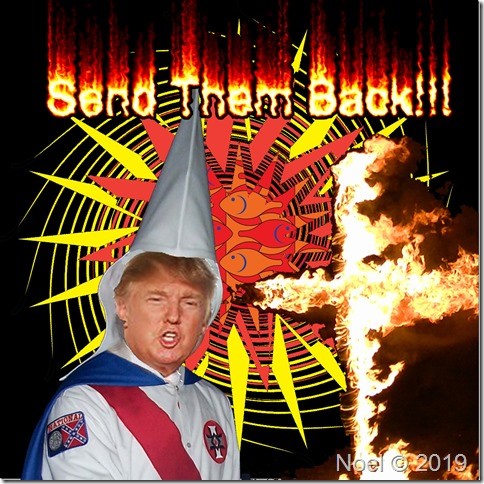 If there were a god he/she/it/them would smite them; lets see if that happens.
If not I guess we're on our own.

Posted by Noel McKeehan at 8:53 PM