Salmon berries are a kinda blah tasting berry that prosper in the rain forests from Northern California to Southern Alaska.

Every season dark green thickets suddenly are festooned with shiny green reflecting points of light that turn to salmon roe color and, finally to a black red.

I have been wandering the rain forests of Oregon and Washington for all of my life - sojourns elsewhere excluded.

Every year the berries appear and seem to be as abundant as ever.

Sadly, the creature for whom they are named teeters on the edge of extinction.

When I was young enough to have two living grandfathers I used to walk with one of them along a country road not far from his house in the woods.

There was a water filled ditch at the road's edge.

At a certain time of year the ditch was filled with salmon returning from somewhere and going to somewhere.

That ditch is now a strip mall.

Those salmon don't even appear in countable numbers on major salmon highways like the Columbia River any more - ask your local Orca and they will tell you that is why they are gradually starving to death: the massive sea of silver that abounded once has disappeared, and they - the Orcas - are disappearing with it.

The Southern Pod at least; but I am confident that humans are well on the way to eliminating the food of the other pods.

There is a delta at the mouth of the Willamette River to which The Original People used to repair in Autumn.

They gathered nuts and berries and such for the winter, gamboled in the sun and hunted and fished.

Chief among the fish that they harvested were salmon - BIG salmon, unlimited, or so it seemed, salmon.

The people split them and dried them in the sun, they spilt them and smoked them and for their occasional Autumn celebratory feasts they broiled some of the choicest on planks of cedar.

I have heard that there was an Original People tale that there were so many salmon that it was possible to walk on their backs across the narrow stretch of water from the land that is today US Highway 30 over to what is today called Sauvie Island; the salmon are pretty much gone and one would need to jump off a houseboat to get in the salmonless water to swim to the island.

They now grow a lot of cucumbers there; I guess that's cosmic parity.

And the salmon berries remain of a reminder of what once had been. 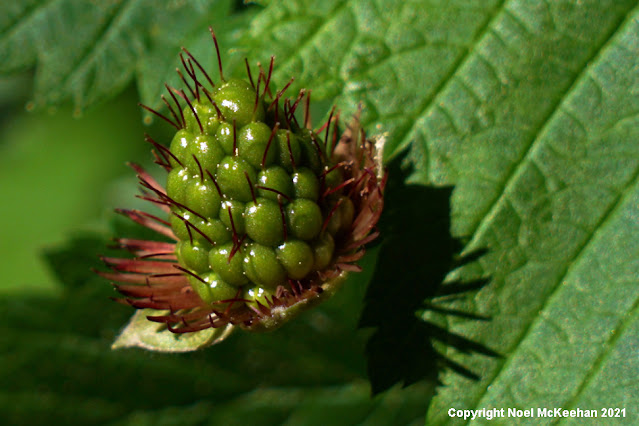 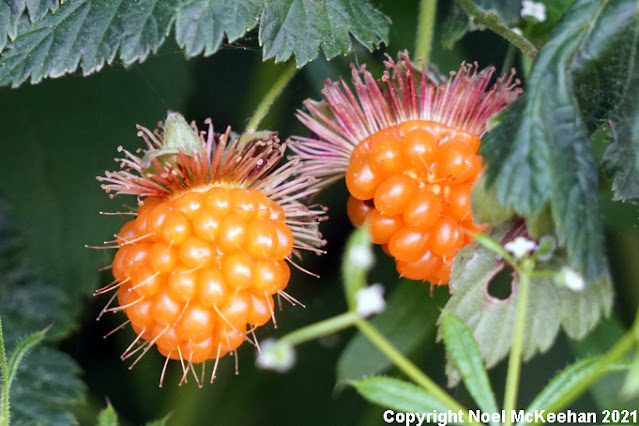 Posted by Noel McKeehan at 9:37 AM