The Lady At Bistro Mazarine

As sometimes happens in Paris the rain had moved in with a vengeance.

Unlike its usual fleet and go, follow the wind, follow the clouds, occasional showers, this one had been serious: it just kept going for hours.

And that had really adverse effect for me.

My job in Paris is to walk for several hours every day and shoot pictures.

When rain at its worst is a here-it-is, now-it's-gone sort of thing, a little rain gear and a big pocket to stow the camera during the showers is all one needs to spend the day meaningfully employed with a camera on the streets of Paris.

But this day was not one of those days.

I have seen pictures of Paris in the past when such rain had brought the Seine into the streets in front of my apartment - but that was in the past.

Those things don't happen now, in modern times, do they? I heard myself asking myself.

As cabin fever began to threaten my life I decided to go out into the rain, cross the street and go to Bistro Mazarine for - whatever - at least I would benefit from not being in my apartment any longer.

I was the only person in the outside part of the place when I got there.

I took a table and ordered un verre de rosé and sat there sipping, listening to the rain on the roof of the tent covering the outside bar.

After some period of time - minutes, hours, days, years, eons? - I was brought back into the present.

The rain still drummed upon the roof.

But I was in the presence of another human.

She took a chair at a large table suitably distant from me and looked very sad.

I began to have delusions of being Hemmingway.

After her glass of wine was delivered she looked every bit still as sad.

I left before she left, but not until I had watched her for some period of time: minutes, hours, days, years, eons?

I have always wondered who or what she was waiting for. 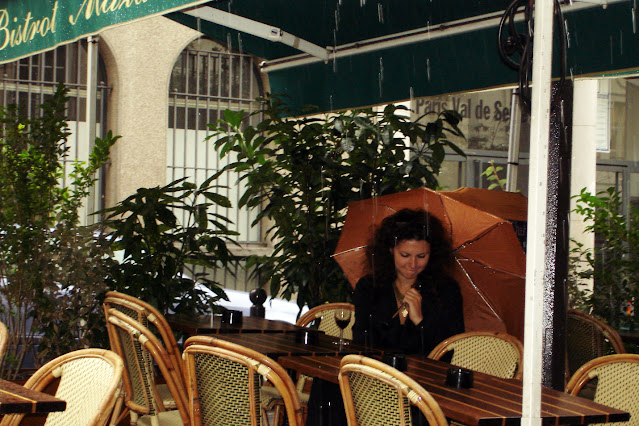 Posted by Noel McKeehan at 4:18 PM