Sometimes when I have an extended wait for the ferry I take a walk on the several mile long trail the runs along the edge of the bay.

The trail is a sort of microcosmic spectrum of habitat.

In the fall the rains fill a swampy area that covers a lot of acres and a variety of brackish water plant life that has adapted to being in a foot or more of water part of the year to being in dry ground other times.

There are niches of all kinds of native trees and bushes: salmonberry, thimbleberry - not really native - elderberry, Pacific Crabapple, salal, and so forth. 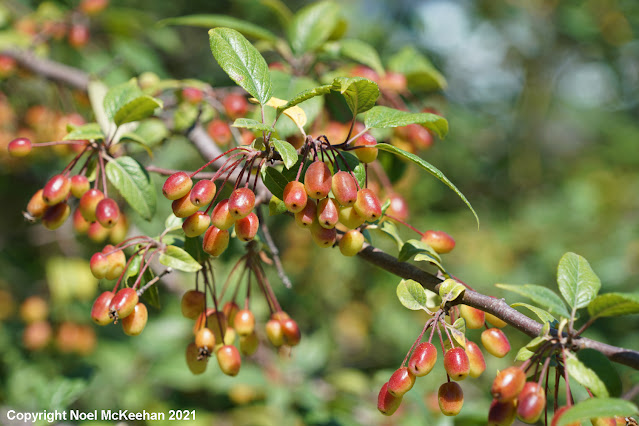 There are a lot of old big leaf maples and a fair number of Douglas fir.

There is an alarming stand of poison hemlock.

There are a lot of teasels.

There are a lot more things that I can't remember right now.

That whole mélange amounts to great habitat for a wide variety of creatures, and the access to the habitat by a walkable trail gives someone with a camera a lot of opportunities to take pictures of some of those creatures.

I have walked that walk and taken pictures a lot of times when I had a long wait for my ferry and when the weather was good enough to support walking and shooting.

Yesterday was one of those days.

At the very beginning of the trail it is a boardwalk that skirts and then goes into part of the swamp.

This being mid May the water is mostly gone.

In previous times when the water was pretty well maximum I got some good pictures of a bullfrog. 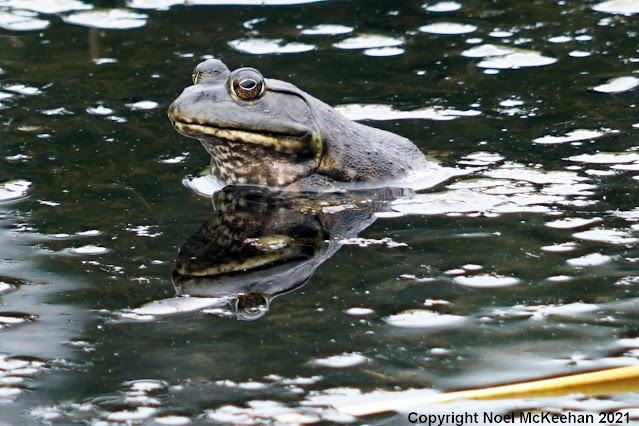 Yesterday there were a few puddles, enough water that it served the purpose of a song sparrow who apparently wanted to be a swamp song sparrow; I have never seen a song sparrow wading; maybe it thought it was a sand piper. 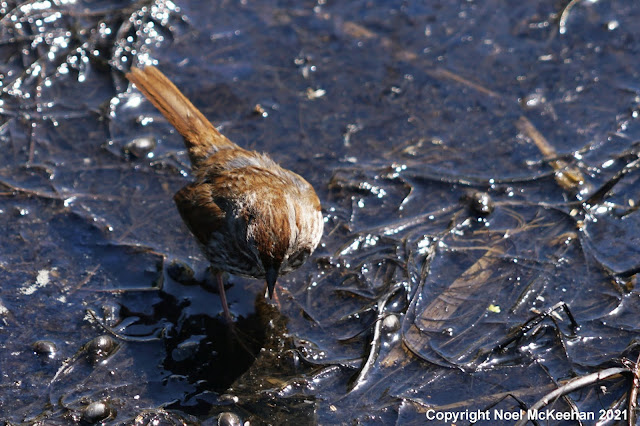 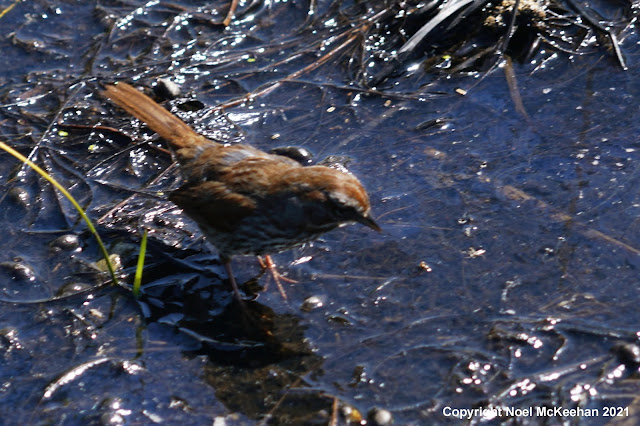 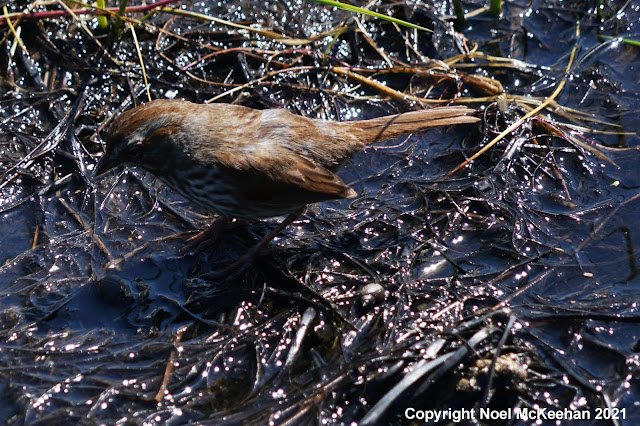 A little farther along I saw some native honey bees pollinating native blackberries. 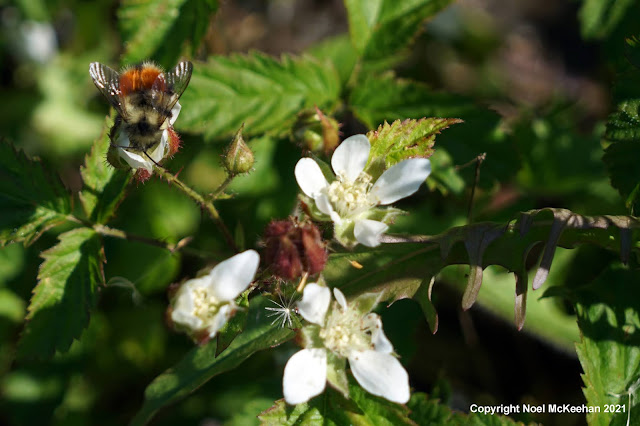 I was pretty close to where I remember two lone Douglas firs had been the home of a pair of ospreys.
One of the trees was a background and one had a nest in it.  One time I got a few pretty good pictures of the pair at their nest.  They were at the outer edge of what my 24/240 telephoto lens can do, but the 43mpx sensor made cropping possible for additional magnification. 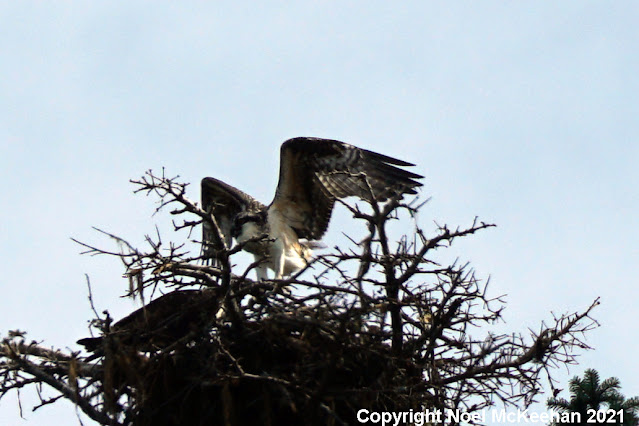 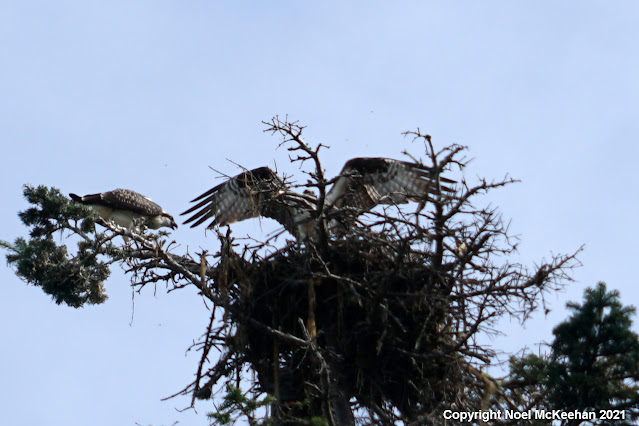 After seeing nothing of consequence for a while I heard a soft chirp - just one - and I stopped; I was way beyond the osprey trees, which yesterday still had the nest but didn't have the birds, but that chirp sounded like an osprey.  I scanned the Douglas fir in front of me and at first saw nothing; then I saw a big wing - just like the one in the picture you are looking at - and I tried to get in a position where I could see the whole bird and get a picture or two; they would have been really good because the bird was really close; but I couldn't.
The bird shot into the air, immediately got to critical altitude, and folded up in that famous osprey fold that they adopt as the optimum way to plummet into the water and grab a fish that they have seen.
This bird did all of that.
Of course I couldn't perceive what was happening quickly enough, nor could I get organized quickly enough to get a picture.
If I had, and if I had the shutter speed set high enough, and if autofocus worked well enough, I would have gotten a pretty good picture.
But I didn't so I hope my words have acted as a pale substitute.
Finally, not long after the osprey incident, I got some shots of a great blue heron trying to get something it had caught into its gullet rather than wrapped around its beak.
To that end the heron was shaking its head quite violently.
I guess I had the shutter speed set pretty high because I got a couple of pretty good pictures. 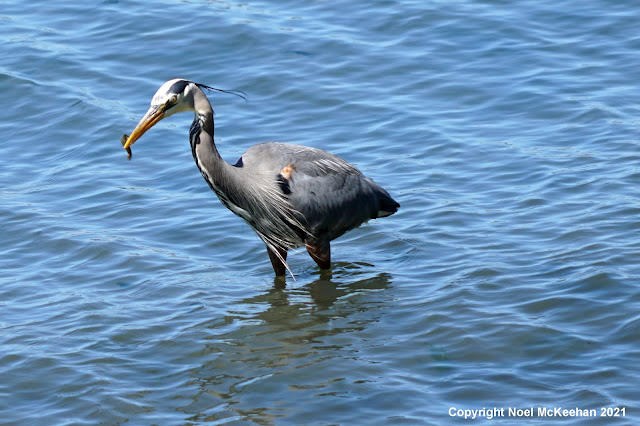 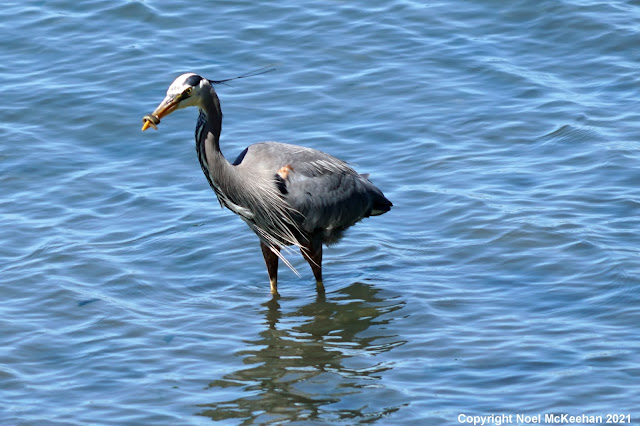 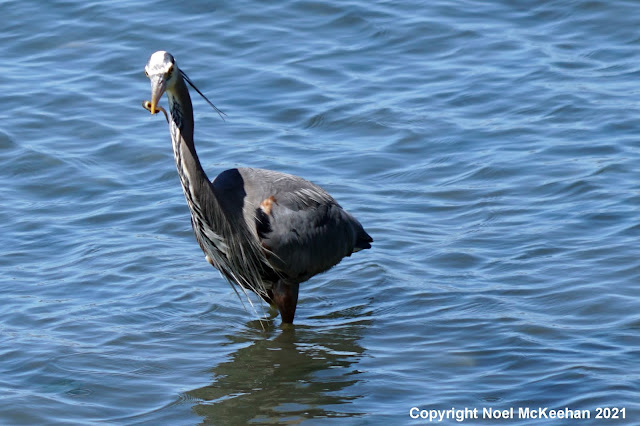